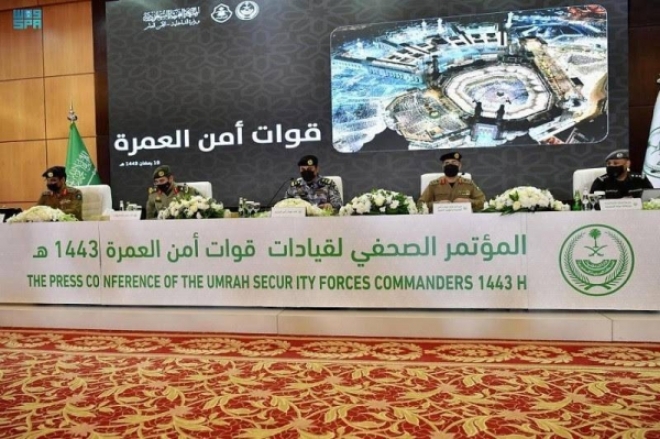 MAKKAH — The Umrah Security Forces reviewed their plan to cope with the anticipated huge flow of pilgrims to the Grand Mosque in Makkah during the last ten days of Ramadan.

Senior officials of the forces briefed on the salient features of the foolproof plan at a press conference held at the Security Forces Officers Club in Makkah on Thursday.

Addressing the press conference, Maj. Gen. Muhammad Al-Bassami, commander of the Umrah Security Forces, said that the security plan for Ramadan achieved its goals since the start of the holy month. He stated that the forces are geared up to cope with the huge flow of pilgrims during the last ten days of Ramadan.

Al-Bassami explained that apart from the mataf (circumambulation area around the Holy Kaaba), the front part of the first floor, the roof of the Grand Mosque and the ground floor have been set aside for performing tawaf. The command and control center of the Umrah Security Forces is working professionally by applying the highest levels of security and safety ever since the beginning of the holy month, he pointed out.

Al-Bassami said that there is great harmony and high coordination with all the partners. “This enabled the security forces to remove all obstacles that stand in the way of providing comfort to the pilgrims and worshippers. The plan also entails confronting negative phenomena such as beggary,” he said while noting that the security forces are working with high intensity with a security cover over the entire city of Makkah.

Al-Bassami called upon the Umrah service providers to enlighten the pilgrims about the necessity of adhering to the scheduled time for the performance of Umrah and complying with the instructions of the authorities in this regard. He thanked the people of Makkah for their positive response to the Umrah security plans.

For his part, Maj. Gen. Salman Al-Jumei, assistant commander of the Umrah Security Forces for traffic affairs, said that the human and mechanical support has been reinforced to manage the traffic flow around the Grand Mosque and within the holy city. The movement of vehicles has been completely rerouted to facilitate the flow of pedestrians along designated paths.

Al-Jumei said that the traffic plan for the last ten days of Ramadan aims to manage, monitor and control the flow of traffic throughout the holy city. The traffic authorities would follow up the transportation of visitors to the Grand Mosque from the beginning of their arrival at the bus stations in the outskirts of the holy city and from there to the premises of the Grand Mosque on board buses through approved routes in accordance with set schedules.

Addressing the press conference, Maj. Gen. Saleh Al-Murabba, deputy director general of Passports, revealed that technical and technological support teams are available round the clock in all the entry points to the Kingdom in order to ensure the smooth flow of pilgrims. He said that the Ministry of Hajj and Umrah has received several requests for extending Umrah visas in the case of sick pilgrims and the necessary measures have been taken to extend the visas.

Meanwhile, Col. Muhammad Al-Lihyani, director of the Unified Security Operations Center in Makkah, said that the center attaches great importance to serving the pilgrims by receiving all calls via the number 911 in the holy city and various governorates under the Makkah region.

On his part, Maj. Gen. Ali Al-Qarni, director of the General Department of Civil Defense in Makkah, said that the Civil Defense had not recorded any accidents or injuries in the first phase of its Ramadan plan. “There is coordination and integration between the relevant authorities for crisis management through the Security Operations Center,” he added.