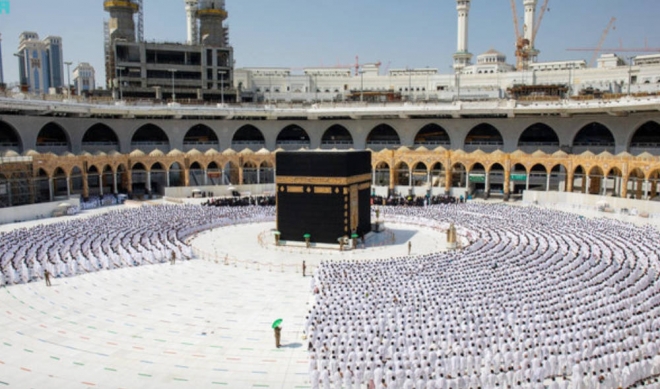 RIYADH: Umrah travel operators in Riyadh have doubled the price of the pilgrim’s tour package from the regular price of SR110 ($30) to SR200 for each person, and this will triple in anticipation of a heavy rush during the Ramadan season.

This will further increase to SR300 during the Qiyam Al-Layl, the last ten days of the holy month, said tour operators in the Saudi capital.

“The huge rush was due to the holy month of Ramadan since most of the people want to spend these days in the holy cities of Makkah and Madinah,” a leading Umrah operator in the city told Arab News.

“The hike in the package prices is due to the rush of pilgrims during Ramadan,” said the operator. They also cited an increase in VAT to 15 percent as one of the reasons for soaring prices this year.

Worshipers and Umrah pilgrims returned to the courtyards of the Grand Mosque in Makkah in full capacity last month after Saudi authorities announced the lifting of COVID-19 precautionary measures and the return to normalcy in the Kingdom.

The General Presidency of the Grand Mosque and the Prophet’s Mosque has reactivated its operational plans for full-capacity worship, with its field teams removing social distancing stickers.

Worshipers stood shoulder-to-shoulder in spiritual scenes after the end of social distancing measures for prayers and tawaf.

These preparations by the General Presidency of the Grand Mosque and the Prophet’s Mosque came ahead of the holy month of Ramadan.

Mohammed Wakil Ahmed, a faculty member at King Saud University who went for Umrah with his family last Thursday, told Arab News: "The travel operators are now charging SR200 per person for a Thursday to Saturday Umrah trip as against SR100 to SR110 before the Ramadan season.”

The weekend packages for trips to Makkah and Madinah start at 4 p.m; from Riyadh on Thursday and finish at midnight on Saturday, he said.

He added that each family is given a large room, while single men must share a room with three other pilgrims.

There are about 100 Umrah travel operators spread throughout the capital, with a concentration of them in Hai Al-Wizarat and Batha districts.

Rates tend not to vary greatly among Umrah tour operators in Riyadh. Buses leave from Hai Al-Wizarat and Batha districts with stops at the central bus terminal so that authorities can take a tally of the number of pilgrims.

During the journey, coaches stop at three points for Maghreb prayers, Isha prayers, and for dinner. Pilgrims change into their ihram at Meeqat in Taif, where they are given half an hour to don their ihrams at the Meeqat point, and they can perform Fajr prayers in the holy city of Makkah.

There are ample mosques, food outlets and boutiques along the routes from Riyadh to Makkah.

Flights from Riyadh to Jeddah are also filling up. According to a leading airline ticketing company in Riyadh, air ticket prices also spiked and ranged between SR1,500 to SR2000.

There are comparatively cheaper tickets for odd timings, but they too will total around SR1,000, operators said.


⇐ Previous:
Haj rates to increase by 40% due to downsizing of quota
Next: ⇒
Banu Anif Mosque in Madinah