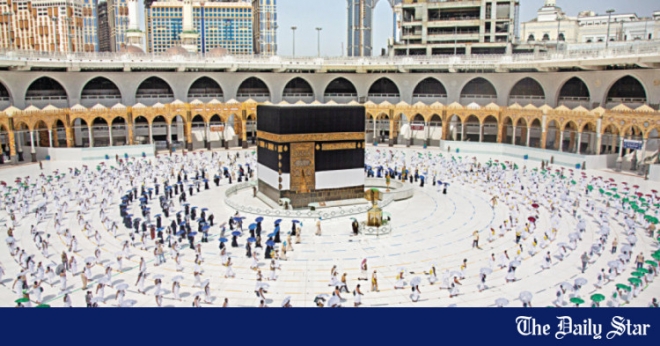 Immigration of all aspirant hajj pilgrims will be completed at Dhaka airport this year, waiving the need to wait in long lines in Saudi Arabia.

Bangladeshi hajj pilgrims will be able to enter Saudi Arabia through a jet bridge after landing at the airport without any immigration formality.

The issue was discussed at a meeting today at the Religious Affairs Ministry.

With Kazi Enamul Hassan, secretary, of the religious affairs ministry in the chair, the meeting was held to discuss hajj preparation 2022.

Earlier in 2019, immigration formalities of a limited number of aspirant pilgrims at the Saudi end were completed at Hazrat Shahjalal International Airport in Dhaka.

Pilgrims earlier had to wait for hours at the airport after landing in Saudi Arabia to complete the immigration procedure causing immense suffering.

Only two countries -- Malaysia and Indonesia -- can now complete the immigration process of their pilgrims at their airports, sources at the religious affairs ministry said.

Bangladeshi pilgrims will be able to have their immigration procedures completed in Dhaka before departure within a minute which usually takes hours in Saudi Arabia.

Around 57,585 Bangladeshis are scheduled to perform hajj this year, which is likely to be held in early July.

About 10 lakh people from across the world will be allowed to gather in Saudi Arabia to perform the hajj this year.

In the meeting, the Hajj Agencies Association of Bangladesh demanded to fix a rational airfare for the pilgrims, sources at the meeting told The Daily Star.

Airfare of the pilgrims was not finalised in the meeting, added the source.

Different other issues including the announcement of the hajj packages, preparation of hajj flight schedule, allotment of space for Saudi authorities at the Dhaka airport for implementation of immigration, dedicated hajj flights, and issuance of air tickets through Hajj agencies were discussed in the meeting.

State Minister for Religious Faridul Haque Khan in the meeting said, "We have to ensure better hajj management by working with utmost sincerity due to time constraints. For this, all concerned have to work day and night in the remaining time."

He said we have to complete hajj preparation in a very short time in different situations following the Covid-19 pandemic.