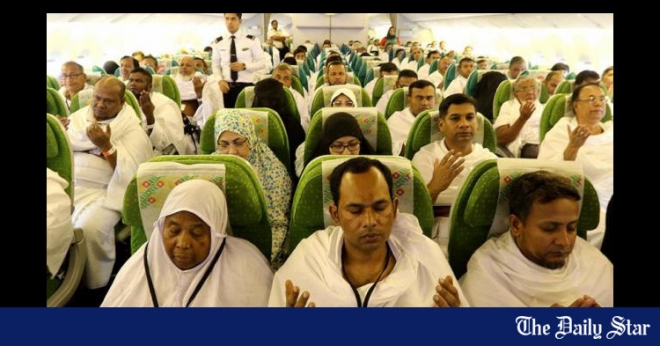 The demand for allowing a third carrier for operating hajj flights is getting louder as the existing system of ferrying the pilgrims to Saudi Arabia has been costing the hajis more and is creating a duopoly.

National flag carrier Biman and its Saudi Arabian counterpart Saudia are the only two airlines transporting pilgrims from Dhaka since 2012 as per the hajj agreement signed between the two countries.

"We have been hostage to the duopoly of Biman and Saudia for years with regard to sending people to perform hajj. The two airlines make and change decisions almost arbitrarily without bothering about the problems of the pilgrims," M Shahadat Hossain Taslim, president of HAAB, told The Daily Star.

"The government must allow a third carrier to improve hajj management," he said, adding that it is allowed in different neighbouring countries, including India, Pakistan, Indonesia and Malaysia.

"These countries allow a third carrier to carry hajj passengers. Why can't our country do the same?" questioned the HAAB chief.

If one more airline is allowed, he said, HAAB could offer different types of packages including shorter ones, which would benefit the hajis.

Both HAAB and ATAB leaders said every year uncertainty looms over sending pilgrims to Saudi Arabia in case of cancellation of slots of Biman on various grounds.

A slot means landing and take-off permission granted to a specific airline by any airport authorities.

Biman gets a specific number of slots to carry hajis to Saudi Arabia.

"If a third carrier is allowed to operate hajj flights, there won't be any such uncertainty," said Taslim.

However, due to the global Covid pandemic, the largest annual Muslim congregation was held on a limited scale in the last two years. The hajj typically packs millions of pilgrims into congested religious sites.

In 2012, an agreement was signed between Bangladesh and Saudi Arabia. It said the national airlines of the two countries will be able to operate hajj flights, creating the scope for duopoly.

ATAB President SN Manzur Murshed told The Daily Star, "We are fed up with the way Biman and Saudia behave with different travel agencies during hajj operations. And this happened only because of their duopoly. This must come to an end."

PIA and Shaheen Air from Pakistan, Lion Air and Garuda from Indonesia and four to five airlines from Malaysia can carry pilgrims to Saudi Arabia.

The ATAB president said the government should request the Saudi government so that it allows a third carrier for the betterment of hajis.

"If a third carrier is allowed, the price of air tickets will reduce due to competitiveness in the market," the ATAB president said.

HAAB boss Taslim said: "We have long been demanding a third carrier as Biman and Saudia charge huge airfare from hajis. Besides, the two airlines charge various other fees."

For example, he said, if any haji wants to change his travel date or if any travel agency wants to correct or change names of hajis in case of death of hajis or wants to replace hajis, Biman charges at least $300 for every case.

HAAB has sent letters to the religious affairs and civil aviation ministries to press home their demand for a third carrier.

Contacted, State Minister for Religious Affairs Faridul Haque Khan on Saturday said the government will sign the yearly agreement over operations related to the congregation with Saudi Arabia by early next month.

"After inking of that agreement, I will be able to speak on this issue," he added.


⇐ Previous:
The Grand Mosque’s volunteers — a culture loved by Saudis
Next: ⇒
Immigration of hajj pilgrims to be completed at Dhaka airport