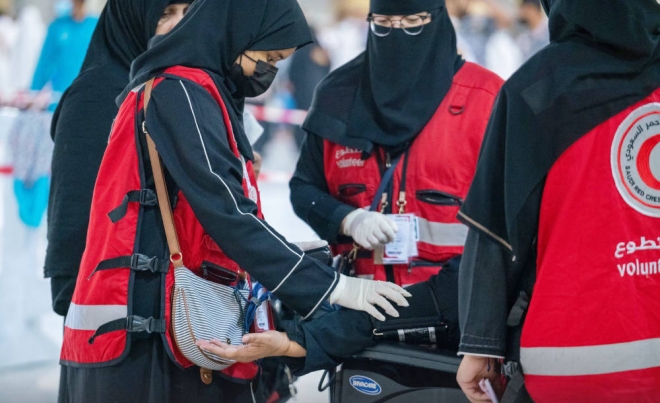 MAKKAH: The General Presidency for the Affairs of the Two Holy Mosques recently announced that thousands of volunteers are working at the Grand Mosque during the holy month of Ramadan.

The areas in which those volunteers work varied from translation to helping the elderly use transportation services (electric vehicles). The volunteers were recruited through the Ministry of Human Resources and Social Development’s national platform for volunteer work.

This came at a time when the Saudi Red Crescent announced that 1,728 of its personnel, including doctors, specialists and medics, will be volunteering at the Grand Mosque during Ramadan. They efficiently provided the Grand Mosque’s visitors with emergency care services through 18 main emergency care stations, along with additional sub-stations that covered the remaining parts of the mosque.

So far 20,736 volunteering hours were recorded, while volunteers responded to 1,650 cases of sickness. However, most of the cases that they responded to were mild ones caused by exhaustion.

Some cases are transported to the Grand Mosque’s clinics, while the majority of those seeking emergency care are treated on-site.

He told Arab News: “It promotes the sense of responsibility among our young men and women as volunteer work strengthens the sense of belonging to the society and lets our youth feel how important it is to participate and help build the homeland and serve the Grand Mosque’s visitors, which reflects positively on capacity building.”

“The Saudi Red Crescent Authority is increasing the number of volunteer opportunities available every year to reach one million volunteers in 2030, which is in line with the Kingdom’s Vision 2030 and its objectives,” he said.

Ehsan Hawsawi, a volunteer with the l2jlkyawatan (For the Homeland) team, said that “volunteer work is honorable and constitutes a main pillar of the society, especially during Ramadan, which embodies the values of giving, solidarity and cooperation.”

“It aims to leave a great impact in the hearts of the visitors of the Two Holy Mosques, teach the generations the dimensions of this work along with its interactive and cultural values, and incorporate the concepts of innovation and diversity in religious, cultural, social, health and tourism-related volunteer work,” she said.

Abeer Fakirah, leader of Hur Makkah Volunteer Team, said: “We continue to give in the country of good deeds. Humans, by nature, cannot live alone. They need to be a part of a society and with a group of people, whether at home, place of study or place of work. This is the case because the social characteristics are among the human traits. Common sense always calls on humans to do good and indefinitely put evil aside.”

She said that volunteer work was considered one of the prominent sources of good deeds because it helped reflect a positive image of society, and revealed its prosperity and how much good morals were spread among its members.

“Hur Makkah Volunteer Team has contributed every year and this year to serving the visitors of Makkah’s Grand Mosque. It has helped provide first aid services and organizational services in support of some bodies that were entrusted with ensuring the safety and security of the mosque’s visitors,” she said.

Fakirah said that 30,000 pilgrims and visitors had benefitted from the team’s services, while the number of male and female service providers from the team reached 145 people. “This constitutes a very small portion of what our homeland deserves.”

Fakirah said that “our goal is to be rewarded by God for our good deeds until Makkah becomes the first city in the world.”


⇐ Previous:
Grand Mosque witnesses a huge influx of pilgrims and worshippers
Next: ⇒
Carriers’ duopoly over Hajj must end