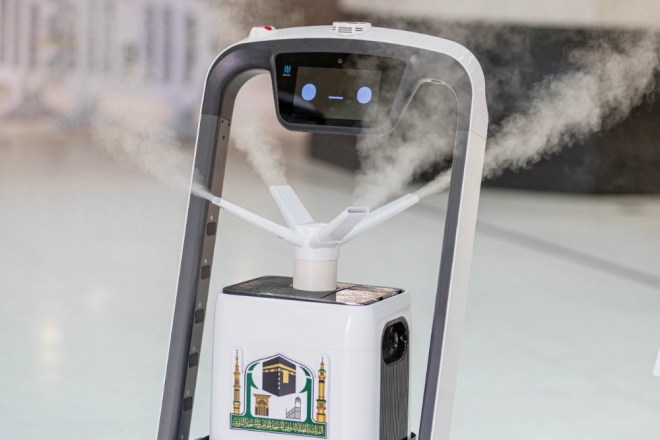 MAKKAH: Saudi Arabia’s General Presidency for the Affairs of the Two Holy Mosques is leaving no stone unturned in its efforts to clean and disinfect the Grand Mosque despite the Kingdom witnessing a steady decline in COVID-19 cases.

Mohammed Al-Jabri, under secretary-general for Agency of Services, Field Affairs and Environmental Protection, said that a range of preventive measures will ensure a healthy, safe environment for pilgrims to perform their rituals.

There is constant supervision of disinfection and sanitization operations, as well as transportation and other services provided at the gates of the Grand Mosque.

The mosque has 25,000 carpets, while around 4,000 male and female workers and 11 smart robots are employed to disinfect and sanitize the site around the clock.

Commenting on the cleaning machines, Al-Jabri said: “The agency uses more than 840 pieces of equipment and machines to purify and sanitize the Grand Mosque. It also follows up on environmental prevention and infection control operations by equipping several teams to sanitize all areas of the Grand Mosque, including outer courtyards, toilets, floors and carpets.”

He added: “There are 8,000 electric and ordinary golf carts to serve pilgrims, including 5,000 ordinary carts and nearly 3,000 electric carts, which are sanitized before and after use.”

To ensure a smooth and organized movement of pilgrims, the agency has assigned supervisors at each of the 150 doors of the Grand Mosque to receive worshippers, and guide them to prayer areas and different entry and exit points at the Haram.

11 smart robots are employed to disinfect and sanitize the site around the clock.

Security staff have also been stationed around the mosque to make sure that pilgrims are not disturbed by others indulging in prohibited activities, such as smoking, selling items or begging.

Al-Jabri said: “The agency has equipped the area with all the necessary services, including Zamzam water containers, air conditioning, cupboards for copies of the Qur’an, sound system, lighting systems, carpets, toilets, in addition to operating many escalators that transport worshippers and the elderly to all available floors.

“The agency’s employees supervise the entry and exit of worshipers, ensure their safety, direct them to the spaces designated for performing prayers, and organize walkways and corridors, with the participation of the competent authorities, according to the plans prepared in advance to facilitate the movement of those heading to the northern expansion with ease.”

Al-Jabri said that the agency distributes more than 2 million bottles of Zamzam water daily and more than 25,000 Zamzam containers are functional  throughout the Grand Mosque, including 2,500 water stands in the northern expansion.

The agency also provides the funeral prayer area with sufficient amount of Zamzam water containers and supervises the distribution of Zamzam water bottles in the courtyard for pilgrims as well as ensuring that carts and containers are sanitized constantly.

More than 50 random samples are taken daily from different locations inside the Grand Mosque to ensure Zamzam water is safe for consumption.

The agency issued 2,000 permits to offer meals to worshippers inside the Grand Mosque and 70  for the mosque’s outer courtyards, Al-Jabri said.