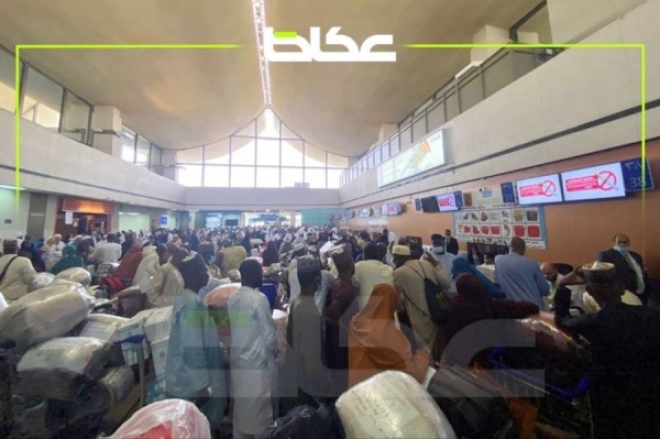 The overcrowding was triggered by arrival of departing pilgrims who came well before their flight time. They chose to squat on floors in the lounges and parking for lack of seating arrangements.

In addition to these pilgrims, the number of regular travelers for the holiday season added to the crush as the winding lines at the checking counters and the overfilled luggage trolleys made passage inside the airport difficult.

Officials blamed the Tawafah establishments for the congestion because they bring their pilgrims to the airport at least 12 hours before the flight's departure time.

Although the airport administration are working around the clock to thin out the overcrowding with all efforts to organizing order in the airport it is taking time. But they have reassured that all flights will depart on time.

"The main reason behind the extremely large number of pilgrims at the airport is a lack of commitment on the part of the Haj companies to the flight schedules," an official said.

The Ministry of Hajj and Umrah has warned companies who send their pilgrims 12 hours before the flight departure time. The ministry has vowed to slap strict fines on the violating companies while also laying punitive measures of banning them from operating for one year.

The case of overcrowding of flights had moved from the South terminal to the North terminal, where the early dispatch of some Umrah companies and institutions for pilgrims to the airport 12 hours before their flights led to congestion inside and outside the terminal.