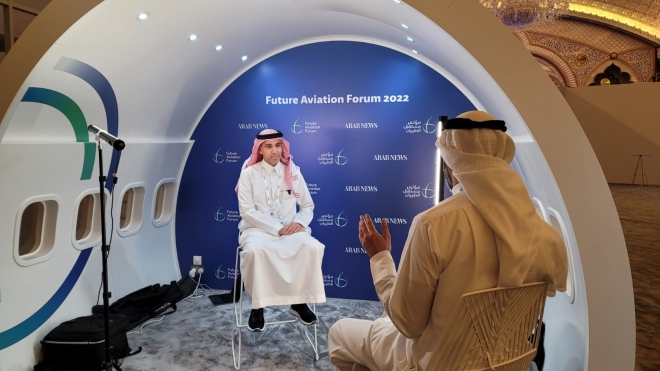 RIYADH: The operator of Prince Mohammad bin Abdulaziz International Airport has confirmed work to increase its capacity by 50 percent could begin as early as this year.

Speaking to Arab News on the sidelines of the Future Aviation Forum in Riyadh, the chairman of the Medina-based facility’s holding company said the number of passengers passing through each year could rise from 8 million to 12 million with “minimal” expansion work.

The plans had been put on ice due to the impact of the COVID-19 pandemic on the aviation industry, but with air travel bouncing back, the expansion proposals are once again on the table.

Ibrahim Sulaiman Al-Rajhi, chairman of Tibah Airport Development Co., said: “I would assume a maximum of 18 months because the current infrastructure of the airport is capable of taking up to 12 million passengers.

“However, the expansion will be minimal and the terminal itself and bridges. So with the minimum investments within a short time, we can go from 8 million up to 12 million passengers."

He added: "I would assume either last quarter this year or in the coming year, we have to start expanding the airport."

The $1.2 billion expansion plan consists of a three-level terminal covering over 156,940 square meters with 16 aircraft stands and boarding bridges.

Reflecting on the impact of the pandemic, Al-Rajhi said: “We were in a very high growth, or a reasonable growth, from the early years until 2019.

“Then we had a huge drop in the market in Saudi Arabia — I would say, in the range of 70 percent to 75 percent. As a specific case, we can see it in other airports of the world and not only in Saudi Arabia.”

The airport has witnessed a significant increase in traffic and passenger numbers in the first few months of 2022 as the COVID-19 outbreak waned.

“We predict that until the end of the year, we will have a better recovery. I would assume we will be in the range of 80 percent to 85 percent. And we assume by the coming year 2023, we will be having, I would say, better numbers,” Al-Rajhi said.

He added: “All the traffic advisors specialized in the aviation industry expect the return of the traffic as it was in 2019 in the range of four years. And I think we may do it a bit faster than that. I would assume in three years we will be catching up.”


⇐ Previous:
'Domestic Hajj packages expected to be available next week'
Next: ⇒
Over 1.5 Umrah pilgrims arrive in Madinah during this year’s season