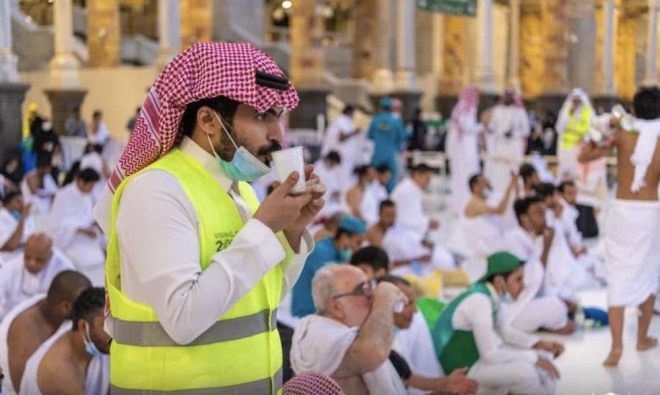 SRINAGAR: News that the Saudi government has banned pilgrims from carrying Zam Zam waters on flights back home has disappointed thousands of intending pilgrims. The water is one of the key gifts that pilgrims bring home for their family, relatives, friends and neighbours.

Last week, a number of publications ran the breaking news that the Zamzam water has been banned from being taken out of Saudi Arabia. The fact is it is incorrect if not blatantly fake.

All these news stories cited a Hajj directive notification issued by the Saudi aviation authority, the General Authority of Civil Aviation (GACA). These reports claimed that Saudi authorities have banned pilgrims from carrying Zamzam water and all airlines have been directed to ensure that any of the passengers travelling from Jeddah or any other airport in the Kingdom do not have bottles filled with holy water nearby. It also talked of the Saudi government warning of “strict action” for violating the order.

However, most of the reports wrongly quoted the instructions mentioned in paragraph 6.9 on page no.11.

“Air carriers strictly prohibited carrying Zamzam water except allowed amount based on electronic service of the Ministry of Hajj and Umrah, and produced by the Custodian of the Holy Mosque Zamzam Project,” the GACA order 50867/2 dated May 11, reads at paragraph 6.9. “Zamzam water container must well be wrapped properly by the wrapping company at the airports. Air carriers must commit to transport pilgrims’ Zamzam on the ferry, it or any nearest alternative flight. Pilgrims’ Zamzam should not be let at the airport until the end of the Haj season.”

Aab-e-Zamzam is the water from the well of Zamzam, located in Masjid al-Haram, Makkah, which is a miraculously generated source of water. The water has great religious significance and people take it back to their countries in great amount after performing Hajj or Umrah. The ever-clean water lacks moss, insects, fungus, or any other impurity and contains a higher level of natural minerals than normal desalinated water so is distinct with heavy taste.

In 2014, the Saudi government limited the Zamzam bottles and cans that pilgrims can carry home. It triggered protests. Under the system in vogue, the pilgrims can fly home with five litres of the sacred water instead of 10 litres which was permitted till 2014.

The Zamzam well is located 21 metres east of the Kaaba and is known as the oldest well of its kind. It dates back to more than 4000 years when Hazrat Ibrahim left his son Hazrat Ismail and his mother Hagar (also called Hajira and Hajar) on the spot. When the suckling mother failed to get any water for her crying baby, Hagar was running between Safa and Marwa hills (part of Haj) to find any help or water. It was after she ran seven times that water started coming out from the feet of her baby. Ismail was the son of Hazrat Ibrahim, one of the most respected prophets in human history, who rebuilt the Kaaba. Hagar was his second wife.

It was at this point that she shouted at the water, gushing out, zome zome (stop flowing) that gave the well and its water the name – zam zam. Since then, this funnel fountain never dries up, even if water is continuously drawn.

A lid-like structure was formed at the top of the well, and the site was set at a depth of 2.5 m below it, at the entrance to the well. Initially, water was pumped from this well by rope and now water is pumped from here at 18.5 litres per second by electric motors. Zamzam water is colourless and odourless, but has a distinctive taste, with a pH of 7.9– 8, and so is slightly alkaline.

Traditional items such as the bucket and pulley of this well are still maintained in the mosque in Mecca. A huge team is working to purify and store this water that seeps down the Mecca. In addition, 4 lakh litres of Zamzam water per day is transported to the King Abdul Aziz Reservoir in Medina.

With a capacity of 16,000 cubic meters, water is supplied to the Prophet’s Mosque from this reservoir. The Saudi Government tests water samples 100 times daily for microbial and chemical sampling to ensure its quality. The Zamzam well was renovated in 2018 and it involved sterilisation of the areas around the Zamzam well by removing the debris of concrete and steel used in the old cellar of the Grand Mosque. The Zamzam Studies and Research Center is mandated to ensure rigorous quality control of water.

Meanwhile, reports said that Saudi Arabia has introduced specialized robots to distribute Zamzam water to visitors to the Two Holy Mosques in Makkah and Madinah.

“The Zamzam water dispensing robot, which can distribute 30 bottles in one round, has obtained a Simultaneous Localization and Mapping (SLAM) patent with a high-performance atomization unit that has an early warning feature with voice transmission,” Arab News reported. “The robot can work between 5 to 8 hours without human intervention and with a fast and energy-saving battery charging feature, and marks a huge development in the history of Zamzam water irrigation.”

The custodians are working to install automatic filling stations according to international standards, in the Grand Mosque.

The $187 million King Abdullah for Zamzam Water Project (KPZW) launched in 2013 has done away with many of the old unprofessional methods related to pumping, filtering, distributing and filling the water, replacing these with the newest, safest technologies. Now the custodians of the Kaaba keep the cans available in airports in Jeddah, Madina and in Kudai in Makkah for outgoing pilgrims.


⇐ Previous:
Religious minister announces to cut Hajj cost below Rs650,000
Next: ⇒
How Much Is Hajj From Usa?