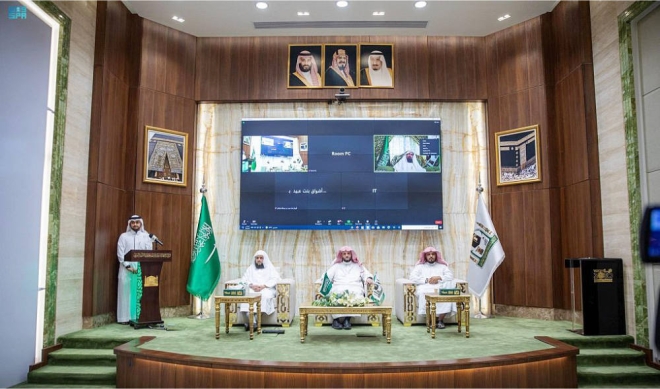 MAKKAH: Officials of the General Presidency for the Affairs of the Two Holy Mosques recently reviewed initiatives designed to improve the visitor experience of worshippers.

The outcomes of a symposium, titled “Fatwa at the Two Holy Mosques and its Impact on Facilitating Procedures for Visitors,” have received the approval of the Saudi leadership.

Projects discussed at the scientific symposium are set to be launched at the Grand Mosque in Makkah and translated into 10 languages including English, French, Russian, Farsi, Turkish, Urdu, Chinese, Bengali, and Hausa.

Dr. Abdulrahman Al-Sudais, head of the General Presidency for the Affairs of the Two Holy Mosques, said the symposium had been the first of its kind held by the government agency and aimed to implement programs related to the fatwa of the general presidency, the fatwa in the Two Holy Mosques, and efforts to make it easier for visitors to access the Grand Mosque, and the Prophet’s Mosque in Madinah.

He pointed out that the symposium had highlighted the continued support of the country’s leadership in backing the development and administration of the holy sites, the empowerment of women, and the introduction of technology such as the use of robots and electronic platforms.

Abdulwahab Al-Rasini, adviser to the general presidency, undersecretary for governance, legal, and development affairs, and supervisor of scientific and guiding affairs, said the body, together with members of the scientific committee for research and iftar, had an important role to play.

Maher Al-Zahrani, deputy president for exhibitions and museums, said that renovation work carried out at the Two Holy Mosques was being put under the spotlight through an exhibition.