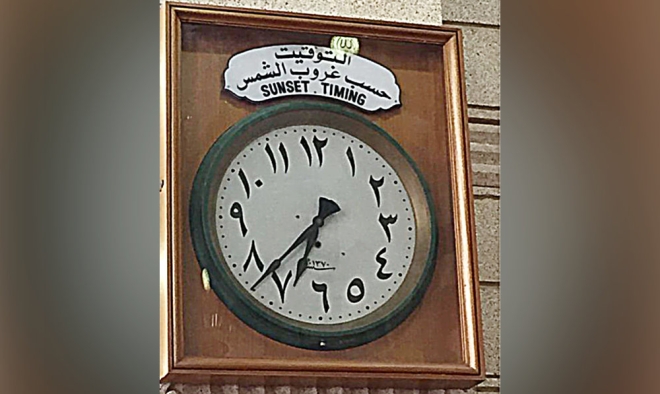 JEDDAH: An old, traditional wall clock ticking at the Prophet’s Mosque in Madinah for over 70 years shows a different time. It is adjusted daily to match the correct time of the day.

The old clock works as per the sunset timing system, which means that as soon as the sun sets, the clock strikes 12. This ancient system holds religious importance as people in Saudi Arabia and the Middle East believe that the new day starts soon after sunset.

According to Dr. Abdullah Al-Misnid, former climate professor at Qassim University, the sunset timing system was introduced so people could adjust their watches daily to read 12 at sunset. “That was the time for the sunset prayer (Maghrib), and the night prayer (Isha) was called for at 1:30,” Al-Misnid explained in a tweet.

Majed Al-Majed, a social media influencer, explained that the Islamic day begins at sunset. Thus, the Tarawih prayers during Ramadan are performed the evening before the fast begins.

“With the sunset of that day, the 0 hour (12:00) starts. An hour later, it (becomes) 01:00 and so on and so forth. Whenever people heard the call for the sunset prayer, people in Saudi Arabia, and like many others in the Middle East, would immediately set their watches at 12:00,” he said.

However, the traditional timings contradicted international timing, making it difficult for people to communicate with others from different parts of the world, Al-Majed explained. Different cities within Saudi Arabia also had different timings.

Therefore, Saudi Arabia adopted the Coordinated Universal Time, the primary standard by which the world regulates clocks and time.

He added that the decision, as is always the case, was met with both public backlash and full support. “With time, people began to accept the situation,” he said.

At the Prophet’s Mosque in Madinah, the old clock still shows the times of the five daily prayers according to the age-old sunset system.

Some sources claim that the first clock at the Prophet’s Mosque was installed on one of the mosque’s walls in 1833 during the reign of the 30th Sultan of the Ottoman Empire, Mahmud II, 26 years before the bells of Big Ben could be heard.

The sunset timing system was also used in parts of East Asia and Eastern Europe that were under Ottoman control in that period.

Contributing to Aramco World Magazine in 1969, Elias Antar, an Egyptian-born correspondent for the Associated Press in Beirut, wrote that the sunset system was the traditional method of telling time in Saudi Arabia.

According to the Guinness World Records, the world’s oldest surviving working clock is the faceless clock dating back to 1386, or possibly earlier, at Salisbury Cathedral, Wiltshire, UK. It was restored in 1956, having struck the hours for 498 years and ticked more than 500 million times.