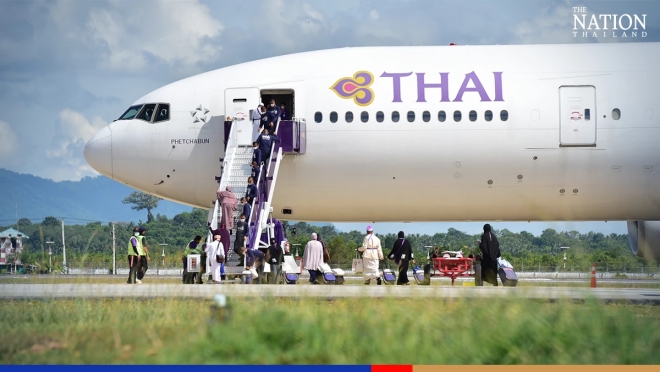 Hundreds of Thai Muslims from Narathiwat embarked on their Hajj pilgrimage to Saudi Arabia on Friday, after diplomatic ties and direct flights were restored between the two countries earlier this year.

A total of 282 pilgrims took a direct Thai Airways flight from Narathiwat Airport in the southern province to Medina in western Saudi Arabia. The city houses the vast Prophet's Mosque (Al-Masjid an-Nabawi), which is a major Islamic pilgrimage site.

Another 286 pilgrims from Narathiwat are scheduled to leave for Mecca on Saturday.

The 568 pilgrims from Narathiwat are part of the 1,580 Thai Muslims from southern provinces and 3,738 from across the country who will journey to the sacred Islamic site this year.

A large crowd of local residents and officials gathered at Narathiwat Airport on Friday to see off the pilgrims.

Pilgrimage to Mecca is considered the fifth pillar of Islam, and Muslims are expected to make their religious journey to the holy city at least once in their lifetime. Hajj commences on July 7 and ends on July 12.