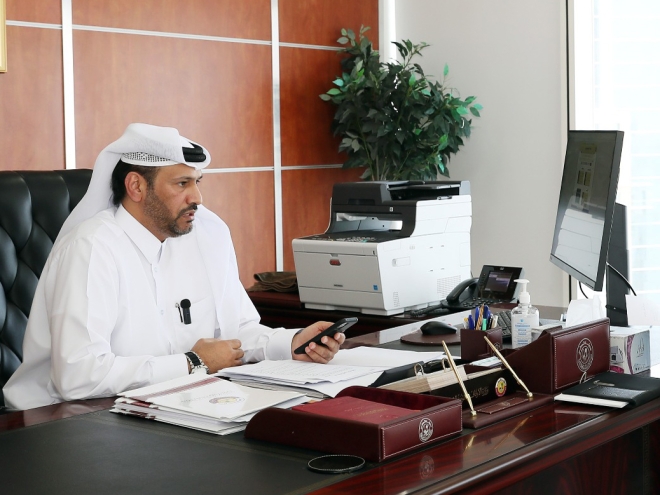 Doha: The Director of the Department of Hajj and Umrah at the Ministry of Endowments (Awqaf) and Islamic Affairs Ali bin Sultan Al Misifri, confirmed the readiness of the ministry and all concerned units, teams and Qatari campaigns to make the Hajj season for pilgrims from Qatar a success for this year 1443 AH.

Al Misifri said, in an interview with Qatar News Agency (QNA), "The preparations for the Hajj season and the announcement in various media and through the ministry's social media accounts have started since the Kingdom of Saudi Arabia announced the establishment of the Hajj season for this year amid precautionary measures."

He pointed out that the number of applicants for Hajj this year, through the ministry's website, amounted to more than 5,000 citizens. He said, "After checking the data and information, completing vaccinations and determining the appropriate age groups according to the conditions and standards required by the authorities of the Kingdom of Saudi Arabia, the accepted ones were notified via emails and invited to register in the campaigns approved by the Ministry."

Regarding coordination with the Saudi authorities on the number of pilgrims and their places of residence in the Kingdom and the holy places, Al Misifri pointed out that there is continuous coordination with the Ministry of Hajj and Umrah in the Kingdom of Saudi Arabia and Tawafa Establishment for South Asian Pilgrims, noting that the ministry, through an official delegation, visited the Kingdom to determine the extent of arrangements and equipment on holy sites and the provision of comfort and facilitation for Qatari pilgrims in their places of residence throughout the period of their performance of the Hajj.

Regarding the quota allocated to Qataris this year, the Director of the Department of Hajj and Umrah Affairs at the Ministry of Endowments and Islamic Affairs explained that there are efforts to increase the quota of Qatari pilgrims for this year, pointing out that 12 approved campaigns have been licensed to run Hajj trips for this year 1443 AH. He said that the door is still open to obtain additional campaign permits and obtain the necessary approvals from the concerned authorities.

Regarding Hajj prices, he stated that the ministry does not set prices, but rather leaves it to campaigns based on the level of services and hospitality provided, adding that "the prices are likely to vary between campaigns."

In response to a question about the Hajj mission, he explained that the mission is formed annually by a decision of the Minister of Endowments and Islamic Affairs and includes several units with different specializations, such as the administrative unit, the technical, the supervision, the communication and the Sharia unit.

On the legal education of pilgrims, he stated that religious education of pilgrims is carried out in a systematic and thoughtful manner, and in easy ways. He pointed out that there is a legal committee affiliated with the mission that coordinates between it and the campaigns and guides to coordinate lectures, religious lessons and jurisprudential consultations for pilgrims.

He revealed that the first delegation from the mission left for the Kingdom of Saudi Arabia on Friday, June 10, to find out all the arrangements.

Regarding the legal obligations required for pilgrims and campaign owners, he affirmed that there is a template for a contract approved by the Ministry of Endowments and Islamic Affairs on the website of the ministry and the campaign owners to be a legal document to guarantee the rights and obligations of both parties in everything related to the services provided by the campaign.

Regarding measures to prevent Coronavirus, Al Misifri called on pilgrims to adhere to the health requirements set by the Saudi Ministry of Hajj and Umrah; Including submitting a negative test result (PCR) for the Coronavirus for a sample taken within 72 hours before the date of departure to the Kingdom, and adherence to the mask in open and closed places according to the instructions of the health authorities and the Saudi Ministry of Hajj, wishing safety to all pilgrims.