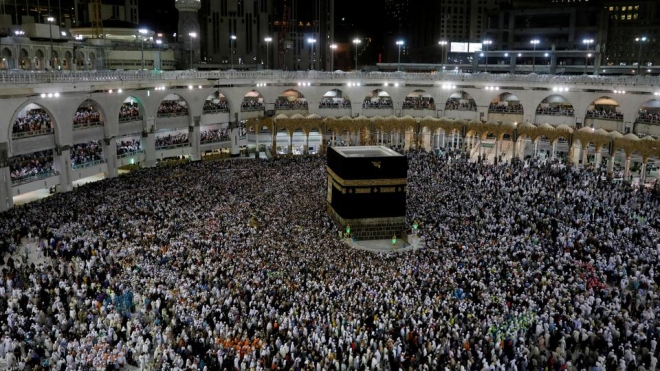 KABUL: Afghan pilgrims will begin their trips to Saudi Arabia on Sunday to perform this year’s Hajj, with excitement high among participants of the holy pilgrimage that was previously restricted due to the COVID-19 pandemic.

Saudi Arabia has allowed up to 1 million people — from both inside and outside the country — to join the Hajj pilgrimage this year, thus expanding the key event to worshippers from outside the Kingdom after two years of tight restrictions.

As Afghanistan has been allocated a quota of 13,582 pilgrims to perform the Hajj in 2022, the Embassy of Saudi Arabia in Kabul began issuing visas this past week, Afghan officials said.

“This year, 13,582 Hajjis will go from Afghanistan together with a number of mentors. The first group of Hajjis will travel from Kabul tomorrow,” Mawlawi Israrulhaq Rahmani, an official from the Afghan Ministry of Hajj and Religious Affairs, told Arab News on Saturday.

“We have been working on preparations and administrative tasks of Hajj for months now, but the Saudi Embassy confirmed issuing visas this past week.”

One of the five pillars of Islam, the Hajj must be undertaken by all Muslims who have the means at least once in their lives. When the Kingdom barred overseas pilgrims in order to curb COVID-19 transmissions, many Muslims, who typically save for years to take part, were deeply disappointed.

With those rules lifted this year, Afghan pilgrims said they are looking forward to the trip to Islam’s holiest city of Makkah.

Sixty-two-year-old Naser Khan, who is from Kabul’s Surobi district, had registered for the Hajj before the pandemic. This year, he finally gets to go.

“I registered for Hajj three years ago and will be going this year,” Khan told Arab News.

“I am so grateful for getting this chance to visit the most sacred place on earth. It’s my first time, and I feel so blessed.”

Abdul Qayum, who is from Afghanistan’s Logar province, also expressed gratitude for being able to perform the Hajj.

“We are thankful to God that we are finally able to go to Hajj after COVID-19 and a change of government,” Qayum told Arab News on Saturday.

“We come with our passports and our bags and will go on the first flight tomorrow, God willing.”