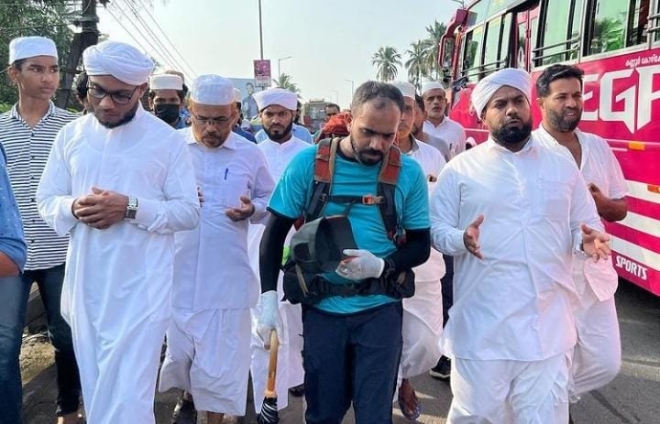 A thirty-year old young man from Athavanad, near Kottakkal, in Malappuram named Shihab Chottur set out on foot to perform Hajj – the annual pilgrimage to Mecca.

Shihab Chottur has begun his arduous journey of walking to the holy city of Mecca all the way from India. On foot, he will cover more than 8,600 km. He will reach Mecca for Hajj in 2023 after travelling through India, Pakistan, Iran, Iraq, Kuwait, and Saudi Arabia.

Shihab set out on his journey after more than eight months of planning. Yet he says no amount of planning will help him while crossing vast stretches of land on foot. “It’s not planning, but it is the aim that matters,” he said.

Shihab has been assisted by the Minister of State for External Affairs Vellamvelly Muraleedharan and many others in making this journey a success. The young man, Shihab Chottur, will enter Pakistan via Wagah border after walking through the states of Karnataka, Madhya Pradesh, Haryana, Punjab, Rajasthan and Maharashtra.

“I have not found anyone to take advice from. We have only heard of people going to Makkah on foot, but no one survives to tell their tale” Shihab Chottur said in a statement.

He told the Indian media that his daily target is walking 25km each day. Shihab further said, “All Muslims should go to Mecca at least once in their lives”.