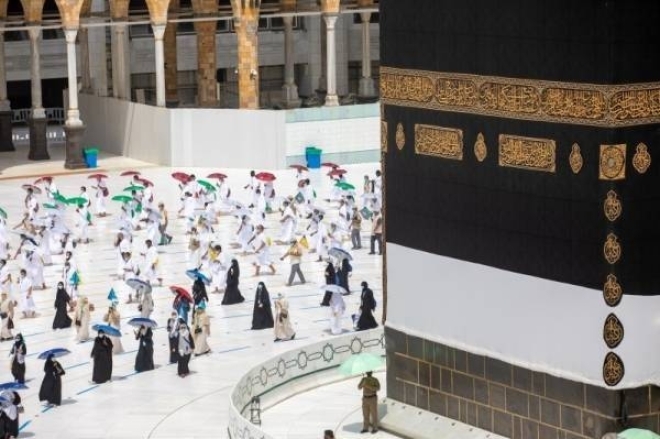 RIYADH — The Ministry of Hajj and Umrah stated that the last date for issuing the Umrah permits would be on the June 23 corresponding to 24 Dhu Al-Qaadah.

The suspension of issuing the Umrah permits will extend for 26 days, with the possibility of their issuance to be opened again on July 19, corresponding to Dhu Al-Hijjah 20, which will be after the end of the Hajj season.

The ministry said that the issuance of Umrah permits would be suspended in order to facilitate the pilgrims coming to perform the Hajj rituals.

The remarks of the ministry were made while answering the frequently asked questions (FAQs) from the pilgrims who seek to perform Hajj 2022.

It indicated that in the event that the nomination for Hajj is in a city different from the pilgrim's city, he can, through the e-track of pilgrims from within the Kingdom or via Eatamarna app, communicate with the Hajj company whose data is available in the reservation details to agree and deal with transportation matters according to what is appropriate for the pilgrim.

As for the ability of the pilgrim to identify the name of the campaign, the ministry said that he could inquire about the request through the e-track of pilgrims from inside Saudi Arabia, or through the Eatamarna app.

If the Mahram (male guardian) is not accepted, he ministry noted that it is because he did not fulfill one of the conditions for registration in Hajj 2022.

Many Hajj pilgrims wondered why they were nominated for a package different from the packages they had previously preferred. The Ministry replied that because all the packages available in the preferred were not available.

The ministry added that due to their keenness that the pilgrims perform the Hajj rituals, it has nominated them through an e-draw according to the available packages. Pilgrims can complete or reject the request, the ministry said.

With regard to COVID-19 vaccines, the ministry confirmed that it is mandatory to complete immunization with one of the approved coronavirus vaccines by the Public Health Authority's (Weqaya) to perform Hajj, noting that all those who have not completed their immunization will be excluded from the e-draw.

It is noteworthy that the Ministry of Health revealed earlier the approved list of COVID-19 vaccines in Saudi Arabia and the number of doses required for each of them for the pilgrims during this year's Hajj season 1443/2022.

The Ministry said that the number of vaccines approved in the Kingdom for coronavirus is 10, which are:


⇐ Previous:
Oman's quota of pilgrims raised by 2,000
Next: ⇒
Makkah Route Initiative contributed to serving us with ease