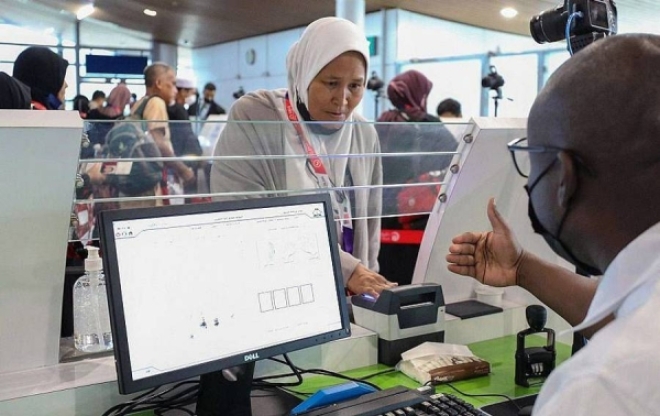 KUALA LUMPUR — Pilgrims departing from Malaysia to perform this year’s Hajj rituals have praised the Makkah Route Initiative that contributed to offering all necessary services for Muslims in countries that the initiative is being implemented.

This has minimized efforts and saved them time, according to works and programs that facilitated the procedures of completing their travel to the Kingdom of Saudi Arabia to perform Hajj rituals.

Pilgrims benefiting from the Makkah Route Initiative at the special terminal of the Kuala Lumpur extended their gratitude and appreciation to the Custodian of the Two Holy Mosques King Salman and the Crown Prince, for what they offer of services to pilgrims and visitors of the Grand Mosque and Prophet’s Mosque.

These services facilitate performing rituals easily and with tranquility, the pilgrims said while commending the role of the Kingdom of Saudi Arabia in serving pilgrims and what they find of services and facilities at the highest levels.

Malaysian pilgrims stressed that implementing the initiative is a distinguished work in terms of speedy procedures and using technology to facilitate their travel procedures.

The Interior Ministry this year, 1443 Hijri, launched the fourth edition of the initiative in Malaysia, in addition to launching it in Pakistan, Indonesia, Morocco and Bangladesh, and it is one of the Pilgrim Experience Program, which is one of the Saudi Vision 2030 programs.

The initiative aims to end pilgrims’ travel procedures from their respective countries through the General Directorate of Passports and partner institutions in implementing the initiative.

The journey of the Malaysian pilgrims in this initiative from the minute they arrive at Kuala Lumpur Airport until finalizing their transport procedures goes through three main stages.

During the aforementioned stages, the authorities ensure that the pilgrims meet the conditions and specifications of travel, including health and age requirements, among others.

This is in addition to coding and sorting luggage per transportation and accommodation arrangements in the Kingdom, and completing their procedures from their countries, starting from issuing visas electronically until completing their travel procedures at Kuala Lumpur Airport.

The Makkah Route Initiative is being implemented at the Kuala Lumpur airport terminal, with the participation of the Ministry of Interior, the Saudi Data and Artificial Intelligence Authority, SDAIA, and Elm Company. — SPA