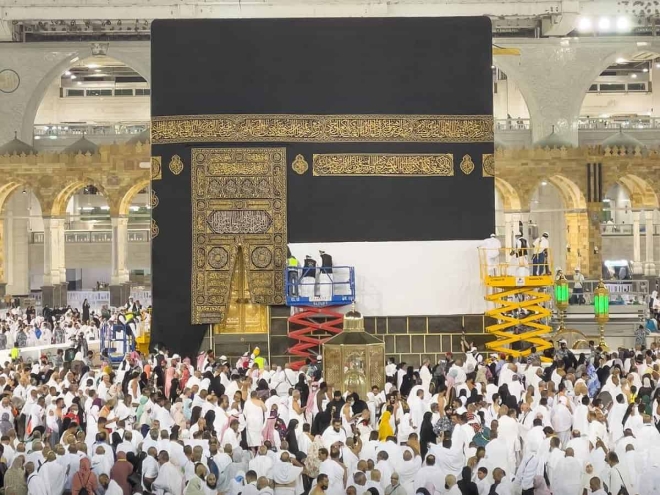 Riyadh: In preparation for Haj 1443/2022, the authorities in Makkah on Sunday raised the Kiswah (Ghilaf e Kaaba), the cloth that drapes the Kaaba by three metres, and covered the raised part with a two-metre-wide white cotton cloth (Ihram) on all four sides, an annual custom.

The kiswah is raised to mark the beginning of the month of Haj each year and is carried out as a precautionary measure to protect the Kiswah because pilgrims who touch or hold on to it during tawaf (circumambulation of the Kaaba) can damage the fine material in the process.

The general president for the Holy Mosque and the Prophet’s Mosque, Dr Abdulrahman Al Sudais, was accompanied by a team of more than 50 people from the King Abdulaziz Complex to the Kaaba to change the lower part of the building’s covering.

The process of changing the new Kiswah will take place on the 9th of Dhul-Hijjah each year, under the supervision of Al Sudais.

The Kiswah, which is black, is made up of 670 kilograms of raw silk with verses from the Quran woven in gold-plated thread. The verses are woven using 120kg of gold and 100kg of silver threads. The belt of the Kiswa is made up of six pieces.

Haj is one of the largest religious gatherings in the world and is considered a religious duty that must be completed during the life of every healthy and economically capable Muslim.

Haj 2022 officially begins on the 8th of Dhul-Hijjah and ends on the 13th day of the same Islamic month. This year it falls between July 7 to 12. One million international and domestic pilgrims will perform Haj this year.