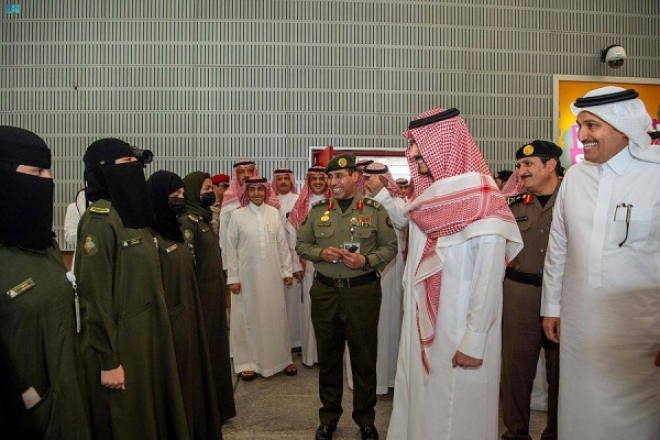 MAKKAH — Prince Badr Bin Sultan, deputy emir of Makkah and vice chairman of the Central Hajj Committee, inspected the preparedness of the facilities at the Hajj terminal of King Abdulaziz International Airport in Jeddah and the Holy Sites to receive the guests of God for the upcoming Hajj.

Prince Badr started his tour of the Hajj terminal during which he was briefed on the progress of work and the operational plan to receive the pilgrims coming to perform the annual pilgrimage of Hajj.

He then inspected the facelift projects implemented along the road leading to the terminal as well as its entrance gates 14-17 and bus parking lots. He listened to a briefing of the General Syndicate’s parking project and the project of the Islamic Arts Biennial, which will be held early next year.

The deputy emir expressed satisfaction over the elaborate preparations and arrangements made for the pilgrims at the Hajj terminal.

He was also briefed on the modernization works at the terminal plaza area, where 20 air-conditioned restrooms were constructed and equipped to be a comfortable waiting area for pilgrims before their movement to pick buses that transport them to Makkah.

The inspection tour also covered visiting the facilities of government agencies that receive pilgrims and provide the necessary services to them at the Hajj terminal complex.

Prince Badr then moved to the Haramain High Speed Railway Station at the airport and traveled on board a train bound for Makkah.

During the travel, he was briefed on the capabilities provided by the airport through its connection with the Haramain train station, which contributes to providing the best services to the pilgrims and facilitating their access to the holy sites to perform their rituals in ease and comfort.

There are 35 trains, each with a capacity of passengers between 417 and 800, to transport the pilgrims between Jeddah and Makkah, with 30 trips per day during the Hajj season this year.

Prince Badr also inspected the arrangements at the Holy Sites, and visited the project to develop and facelift the areas adjacent to Jabal Al-Rahma (Mount of Mercy) in Arafat.