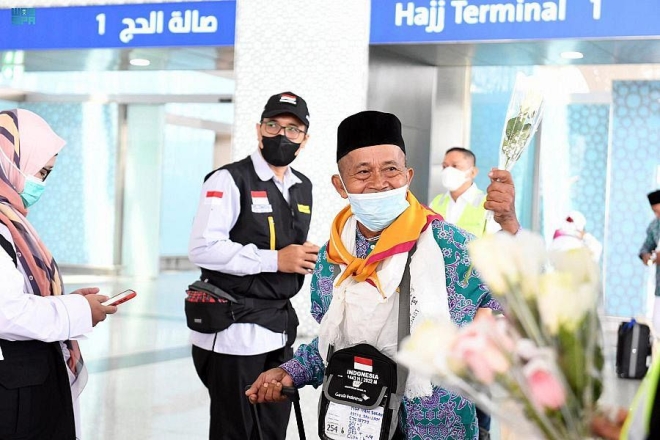 RIYADH: A total of 147,094 pilgrims of different nationalities had reached Madinah as of Saturday, arriving through air and land ports to perform Hajj this year.

The Ministry of Hajj and Umrah reported that 136,007 pilgrims had arrived at Prince Mohammad bin Abdulaziz International Airport in Madinah since receiving the first Hajj flights while 11,087 pilgrims arrived via land.

A total of 49,388 pilgrims have already left Madinah on their way to the holy sites in Makkah, while the total number of pilgrims remaining in Madinah was 97,690.

The ministry said that authorities in Madinah were working around the clock to keep pace with pilgrims arriving through air and land ports to ensure the best experience for visitors performing the Hajj rituals this year.

Pilgrims departing from Malaysia have praised the Makkah Route Initiative, a program offered in some Muslim countries that allowed pilgrims to complete the entire immigration process before arriving in the Kingdom.

The pilgrims benefiting from the initiative in Kuala Lampur extended their appreciation to King Salman and Crown Prince Mohammed bin Salman for the services that facilitated their entry to the Two Holy Mosques.

Malaysian pilgrims said that implementing the initiative helped expedite the immigration procedures, using technology to facilitate their travel to the Kingdom.

The Saudi Ministry of Interior launched the fourth version of the initiative in Malaysia, in addition to launching it in Pakistan, Indonesia, Morocco and Bangladesh. The initiative is part of the Pilgrim Experience Program, one of the Saudi Vision 2030 programs.

Some 1,800 pilgrims coming from Iraq have also commended the high integrated services provided to them on their arrival on Saturday at Jadidat Arar land port in the Kingdom’s northern region.

They cited the warm reception and hospitality, the quick preparations for the completion of arrival procedures, and the health and medical services provided on their arrival.

They expressed their thanks to the Saudi government for the care and Hajj-related services enjoyed by the pilgrims at Jadidat Arar land port.

Service facilities at Jadidat Arar land port are also operating at full capacity during the period of entry for the pilgrims to holy sites.

Saudi Arabia has permitted up to 1 million people to join the Hajj this year, inviting pilgrims from foreign countries for the first time in two years, after COVID-19 restrictions saw the annual pilgrimage limited to residents of the Kingdom.