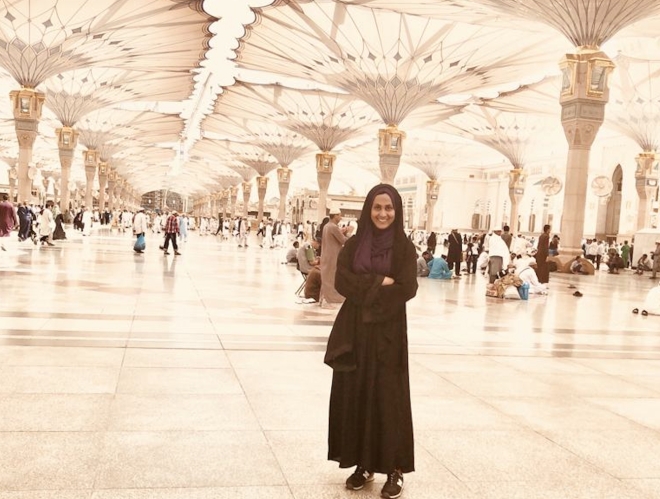 LONDON: A British Muslim who intended to perform Hajj this year has been using Twitter to inspire pilgrims and help those who have anxiety disorders.

Layla Begum Ali, a NHS business planning manager and coach, started learning about how to perform Hajj in Ramadan this year in preparation for the pilgrimage that Muslims must perform at least once during their lifetime if they can.

Ali told Arab News that she started posting practical Hajj tips and any new information she had learned about how to perform rituals and the history behind them on Twitter as a way of teaching aspiring pilgrims and sharing her newly gained knowledge.

The response was overwhelming and she gained a large following on Twitter by people who found her tips motivational and inspiring.

Once Saudi Arabia announced that Hajj would be open to one million foreign pilgrims in April, Ali decided that she would take an “organized, productive and proactive” approach to preparing for the pilgrimage.

Layla Begum Ali, a NHS business planning manager and coach, is pictured at the Grand Mosque in Makkah during  an Umrah visit to the Kingdom. (File/Supplied)

“I was listening to religious scholars or just Googling YouTube videos about Hajj rituals every day, preparing myself for Hajj.

“I started buying my Hajj outfits, booked my (meningitis) vaccination, and followed the guidance that was issued by Saudi Arabia. And that’s when my Hajj tweets started becoming popular.

“I didn’t realize just how much I didn’t know. I realized then that I needed to take responsibility and learn about the different types of Hajj, the rules, and the history. I read about how the Prophet Muhammad performed his Hajj and the more I learned, the more I tweeted.

“Very quickly people were tagging me, commenting on my tweets, or complimenting me on my knowledge. That’s how it started — I was just sharing what I was learning as I went along,” Ali explains.

She said that she condensed the information she had learned to fit the 280 character limit for each tweet and used bullet points to highlight key points.

“I tried to be as simple and efficient as possible with the bullet points and made them catchy,” Ali said.

Ali said that she shares tips on wide-ranging Hajj related issues — from how British pilgrims can cope with the stifling heat in the Kingdom at this time of year (at least 40 degrees) to the importance of buying a Saudi sim card on arrival, and the religious significance of Zamzam water.

“It became a passion. Every day I was learning, I was tweeting,” Ali said.

She added that people started asking her about issues that they were struggling with, such as how to deal with claustrophobia and other anxiety disorders during Hajj.

As someone who has suffered from anxiety in the past and has learned how to deal with it, Ali says that she loves helping people face their fears.

She has vast experience of assisting her local community, having worked in the housing sector, with youth, people with special needs, the elderly, those who have psychological issues, and those in care.

“I think I’m very drawn to people who are vulnerable, need help, have issues, and who are not really confident. I like coaching and helping people. And I think I was managing people’s anxieties without realizing it.

“And when people would say ‘I’m going to Hajj but I have claustrophobia,’ I would talk them through how they could manage it.

“So I was actually coaching people publicly, without realizing it. And people started warming to me and giving me feedback about how the tips were helping.

“I found myself being of benefit to people who I was teaching or coaching,” Ali said.

The manager said that she has found a new social community in the people who she interacts with on Twitter.

“We all had a common goal to go to Hajj this year, and fulfil the fifth pillar of Islam. That was a nice feeling and I felt like I was part of this pilgrim community,” Ali said.

Although she had applied to perform Hajj this year and was selected from applicants to a new draw system that British pilgrims are using for the first time, Ali will not be performing the pilgrimage as the duration and the dates of the package offered did not suit her commitments.

However, she looks forward to performing Hajj next year. She said: “I haven’t stopped thinking about Hajj, it’s still on my mind. I feel like I’ve just started my journey with the intention to go, and learning about it all. I feel like I will be going to Hajj next year and will be applying next year.”

“I want to go to Hajj and thank God for the countless beautiful things that he has given me.”