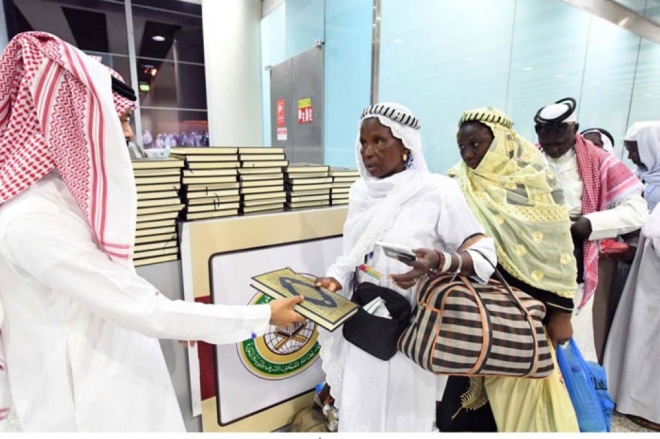 MADINAH — The Prophet's Mosque is ready and fully prepared to receive pilgrims who arrive in Madinah after the Haj to pay homage to Prophet Muhammad (peace be upon him) and pray at his mosque.

The Presidency of the Affairs of the Two Holy Mosques said all the concerned administrations and departments have completed their arrangements to receive the visitors and provide them with consummate services that will enable them complete their post-Haj rituals.

The presidency said it has doubled the number of its staff and equipment to serve the visitors. "We are determined to provide the visitors of the Prophet's Mosque with the best of services and facilities," it said.

In a statistical report, the Haj Committee said more than 83,000 pilgrims arrived in Madinah on Sunday after completing their Haj. It added that the pilgrims came to Madinah on 1,529 buses and 8,124 cars.

It said more than 62,000 pilgrims arrived in Madinah on Saturday and 4,577 left on the same day. The committee said bout 4,190 pilgrims had medical treatment at the hospitals, health centers and clinics in the city.

On the other hand, the "Gift of Madinah" project, by a welfare organization, started to package and distribute more than 500,000 meals and 600,000 containers of Zamzam water among the visitors.

Supervisor of the project, Faiz Talib Al-Ahmadi said more than a million hot meals will be distributed among the visitors during their stay in the Prophet's city.

Meanwhile the tawafa establishment for the pilgrims from Turkey, Europe, America and Australia said it had so far grouped a total of 59,125 pilgrims from Makkah to Madinah and to their respective homes after successfully completing the pilgrimage.

Chairman of the establishment, Tariq Anqawi, said the establishment had prepared a farewell program to see the pilgrims off with feelings of cordiality and love similar to their welcome program on arrival.

He said as many as 18,513 pilgrims left for their respective homes through King Abdulaziz International Airport in Jeddah while 748 left by land. Anqawi said the establishment this year served 240,057 pilgrims who came from 74 countries in five continents.