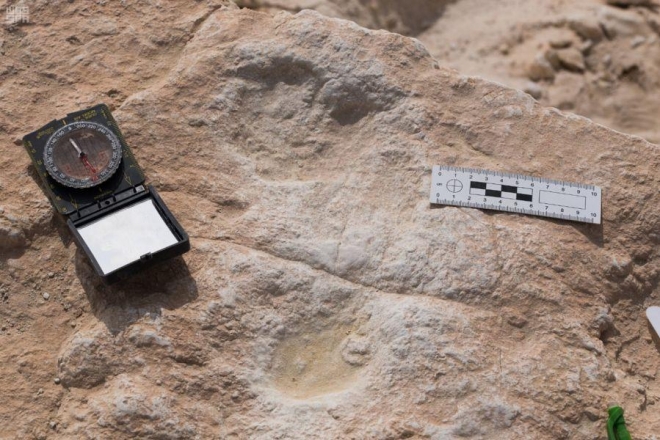 JEDDAH: Saudi Arabia has concluded the past Hijri (Islamic calendar) year with unprecedented archaeological findings, as well as achievements in archaeological protection, rehabilitation of sites and restoration of national antiquities.

The recent discovery of the 85,000-year-old remains of an ancient man in the Nefud Desert on the outskirts of Tabuk was considered among the most important discoveries announced by the Saudi Commission for Tourism and Heritage (SCTH) this year. This astonishing and very rare discovery of a fossilized finger bone is the oldest human fossil on record unearthed outside of Africa and the Levant.

It may shed light on the route early humans took out of Africa as part of early migrations.

The commission also recently announced that it has discovered in Ukhdud, Najran province, a pottery jar filled with more than a thousand coins, metallic stamps, and engraved stones that date back to the first century AD. This modern archaeological discovery is of great scientific value as it indicates the cultural, social and political prosperity of the site.

Other discoveries were made in Saudi Arabia’s Al-Ablaa, a site of archaeological treasures in Asir province. The foundations of a mosque dating back to the first Islamic era had been found with an area estimated at 616 m².

The commission’s team of archaeologists have also found a number of interconnected architectural units in the area that contain many archaeological phenomena. The most important of which are walls, circular basins and water reservoirs, as well as a large pottery tractor used to store grains and agricultural crops produced by the residents of Al-Ablaa.

Also, the discovery of a 2,000 year-old carved drawing of a number of camels in a mountain in Al-Jouf region, has garnered great interest in international archaeological arenas.

According to a collaboration between the French National Center for Scientific Research and SCTH reported earlier this year in the Cambridge journal of Antiquity , the so called “Camel Site” has life-size carved camels into rocks that date back to more than 2,000 years ago but were somewhat eroded because of the weather.

Moreover, archaeological finds at the site of Halit, in the province of Dawadmi in Riyadh, have discovered the foundations of a mosque that was built with in the style as mosques in the first Islamic era.

At the mining settlement of Asham, in Al-Baha region, foundations of another mosque were discovered, dating back 1,000 years ago. This mosque is considered one of the earliest in the south of the Arabian Peninsula, as it includes a foundation stone that indicates that it was founded during 1023 AD.

The commission also announced earlier the discovery of 15 archaeological sites in several locations across the Kingdom during 32 joint Saudi-international expeditions.

Among the discoveries was an elephant’s carpal bone in Tayma, one of the oldest settlements in the Kingdom, during the 15th century.

Those important findings indicate the prominent historical status of Saudi Arabia and the Kingdom being a cradle for human civilizations.

Prince Sultan bin Salman, head of the commission, previously said in a press conference that Saudi Arabia has become one of the most advanced countries in the field of research and archaeological discoveries in recent years.