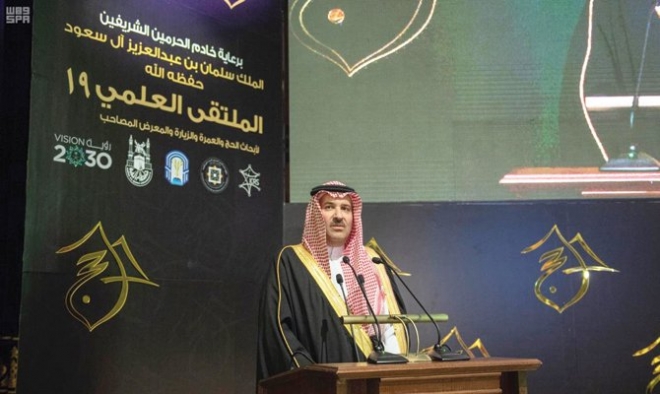 In its 19th edition, the forum is organized by the Custodian of the Two Holy Mosques Institute of Hajj and Umrah Research at Umm Al-Qura University, in partnership with Taibah University.

More than 30 governmental, nongovernmental and charitable authorities took part in the forum.

Prince Faisal said: “The Hajj, Umrah and Visit journey is a religious duty in Makkah, a desire in Madinah, and at the same time, a historical and cultural journey. The many sites of Islamic history in Saudi Arabia are a great gift from God.”

Prince Faisal said budgets had been agreed by the regional secretariat and Hajj Ministry through the “Hajj Guests” program and the Madinah Regional Development Authority, to develop historical Muslim sites to educate pilgrims on Islamic history.

He noted that according to statistics, 90 percent of foreign pilgrims wish to visit Madinah, noting that the state was fulfilling its duty by providing comfort and safety to visitors.

He also thanked the institute for its efforts and cooperation, and Umm Al-Qura University for organizing the forum which alternates annually between Makkah and Madinah.

Dr. Sami Barahmin, dean of the Custodian of Two Holy Mosques Institute for Hajj and Umrah Research, said the forum gave a chance to researchers, specialists, officials and workers in the Hajj, Umrah and Visit fields to showcase the results of their studies and expertise, to better serve pilgrims and other visitors.

This year the committee received 220 research paper submissions from academics and departments. After arbitration, 50 were chosen along with 40 working papers documenting the initiatives, accomplishments and experiences of charitable, governmental and nongovernmental authorities connected to the Hajj and Umrah.

The institute also signed six cooperation agreements on the sidelines of the forum with a number of other universities and institutes, Barahmin said, that would aid cooperation in various research projects on the Hajj and Umrah.