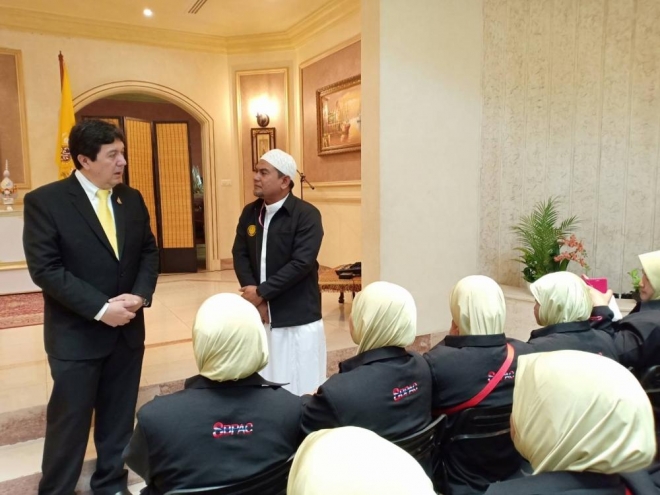 JEDDAH — Thai Consul General Soradjak Puranasamriddhi, along with Thai officials, recently received a group of 170 Thai Umrah pilgrims at his residence in Jeddah.

The group which consisted of Thai Muslims from the southern part of Thailand came to perform Umrah under a program of the Southern Border Provinces Administrative Center (SBPAC), sponsored by the Royal Thai government.

Every year, SBPAC provides a free full package for hundreds of Thai Muslims from the southern part of Thailand, where the majority of Thai Muslims reside, to perform Umrah and Haj.

Some 200 Muslims from the region have all of their Haj expenses paid for by the Thai government.

SBPAC selects 140 Muslims who are granted a free Haj. This group includes those who are religious leaders (50), family members of victims of regional violence (70) and those recommended by SBPAC officers (20).

Various criteria are used to select those who qualify for a free Haj.

Among its other responsibilities, SBPAC manages a variety of projects that aim to enhance the quality of life of those living in the southern border provinces of Thailand. These economic, social and educational projects aim to develop community identity and multiculturalism in the region.

Social projects include the responsibility for facilitating the registration, orientation, and travel of Thai Muslims to Saudi Arabia to perform Haj and Umrah.

Great emphasis is also placed on the economic development of the region. There are plans to create an economic triangle to develop the Deep South. Three districts will be turned into models of development that will boost the local economy and increase security. This triangle city model will include investments in power plants, new tourist attractions, agricultural projects and the construction of a new airport in the region. — SG


⇐ Previous:
Hot weather to continue in Jeddah, other Saudi areas
Next: ⇒
From smart systems to e-tracking, Hajj goes high-tech this year