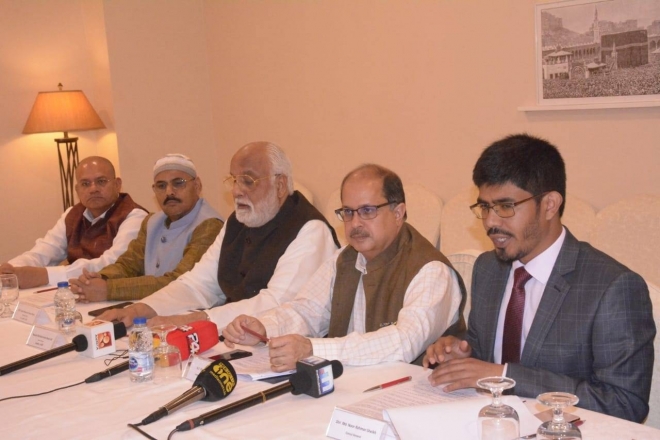 MAKKAH — “We are happy that this year’s Haj has gone off smoothly and incident-free and a record number of 200,000 Indian pilgrims performed Haj successfully this year,” said the Indian Ambassador Dr. Ausaf Sayeed here on Tuesday night.

He, along with Consul General Md. Noor Rahman Sheikh and members of the govt of India’s Haj Goodwill Delegation led by Nawab Mohamed Abdul Ali, prince of Arcot and Syed Ghayorul Hasan Rizvi, chairman, National Commission for Minorities as deputy leader, and Consul (Haj) Y. Sabir, lauded the arrangements made by the Saudi government for Haj this here while making this statement during a press conference here.

They highlighted the fact that the pre-Haj phase had also gone off very smoothly with good accommodation and transportation arrangements for the 140,000 pilgrims who had come through Haj Committee of India (HCOI), and the remaining 60,000 through Haj Group Operators (HGOs).

They stressed on the excellent medical facilities that were made available for Indian pilgrims and special care was taken for pilgrims falling in the high risk group. All the 45 pilgrims above 90 years of age, including the 101 years old Haji (Attar Bibi) have performed Haj and they are hale and hearty.

The ambassador started the press conference giving inputs on Haj arrangements while the consul general spoke at length on the facilities provided to pilgrims, including train services, medical facilities etc.

The envoy revealed that the total number of deaths in Mina-Muzdalifah-Arafat this year is 11 as compared to 21 deaths in the region during Haj last year.

Consul General Sheikh then gave the medical update (till Aug. 12) that put the total number of deaths at 52 (44 HCOI pilgrims, 8 HGO pilgrims), adding that the number of deaths had reduced as compared to 73 till the same period during Haj-2018. Total death cases during Haj 2018 were 187. The update revealed that total hospitalized cases were 1,258 (Indian Haj Mission Hospitals: 893; Saudi Hospitals: 365) and the number of birth cases was 2 (HCOI pilgrims) only. It was 10 during Haj 2018.

Sheikh said that movements in the Mashaer region during the core Haj period, including Jamarat movements, have been very smooth. Wuquf at Arafat and night stay in Muzdalifah were also smooth. In addition ambulances took 55 Indian pilgrims to Arafat for Wuquf.

He, while lauding the quick response of the Saudi government in addressing issues, said that the issues raised by the pilgrims during their stay in Mina were addressed by the Indian Haj Camp Office by taking up with Moallims, Moassassa and Haj Ministry.

The consul general also said that that drizzles in Arafat and Mina provided huge relief to pilgrims from the hot weather and they were able to get confirmation that their Adahi (Sacrificial) coupons have been executed. By around 2 p.m. of 10th of Dhul Al-Hijjah, all the 71,846 Adahi of the opted pilgrims had been executed.

The diplomat also highlighted the Indian govt’s preparatory efforts of setting up the medical infrastructure for this year’s Haj. The Ministry of Minority Affairs had sent 2 medical coordinators, 168 doctors (37 lady doctors) including 35 specialists and 181 paramedical staff on deputation. The Ministry also sent medicines and medical equipment worth about 3.5 crore rupees ($490, 560 approximately) from India.

With aim of providing health services to pilgrims at their doorsteps instead of ailing & weak Haj pilgrims coming to the dispensaries for minor ailments, mobile medical teams made visits to different buildings of pilgrims.

e-MASIHA (e-Medical Assistance System for Indian Pilgrims Abroad), an online system to create and maintain the complete health database of Indian pilgrims along with doctors’ prescriptions, medical treatment as well as medicines disbursal, was developed by CGI Jeddah in Haj 2018 and continued successfully in Haj 2019 also.

To assist in helping the pilgrims perform Haj with ease and comfort, the ministry had sent 620 officials (administrative and medical) on deputation for Haj duty. Main offices of Indian Haj Pilgrims’ Office (IHPO) were set up in Makkah and Madinah, he added.

The ambassador and the consul general also stressed on the remarkable initiatives launched in Haj 2019:

• Haj 2019 Survey: Mobile app “Indian Haji Information System’’ developed by CGI Jeddah for the benefit of pilgrims is very popular amongst the pilgrims and it aided them in locating their accommodation, maktabs in Mina, branch office etc. as well as lodging any grievances/concerns. More than 1,40,000 downloads have been done and is being extensively used during the entire Haj season. This year, a trilingual (English, Hindi and Urdu) new feature “Haj-2019 Survey” has been added which will be carried out during this post-Haj phase.

• Pre-tagging of baggage: For the first time, based on CGI Jeddah’s pre-allotment of buildings in Makkah and Madinah, HCOI has put tags on baggage of pilgrims, marking the hotel/building details along with the room allotted to the Pilgrims. This has enabled prompt sorting and delivering of baggage to respective pilgrims very fast.

• E-Visa through ‘Electronic Path System’: India is one of the three countries which has done 100 percent implementation of E-path System of Ministry of Hajj and Umrah, which greatly eased the Haj-immigration process in the Kingdom. This year, CGI Jeddah has been able to achieve 100 percent electronic entry of accommodation units for Makkah and Madinah for all 1,40,000 HCOI pilgrims.

• In-Patients Details (IPD) have been integrated in e-MASIHA (Medical Assistance System for Indian pilgrims abroad), an online system developed by CGI Jeddah in Haj 2018 to create and maintain the complete health database of Indian pilgrims along with doctors’ prescriptions, medical treatment as well as medicines disbursal.

• Comprehensive arrangements were made for the smooth reception, comfortable stay and hassle free movement of 2,229 female pilgrims who arrived for Haj without male Mehram, by providing them dedicated buildings, a separate branch-cum-dispensary, bus point and buses with an overall supervision by a female coordinator assisted by 16 female officials and about 10 female Khadim-ul-Hujjaj.

• Availability of round-the-clock new model (2018 and above) and good quality buses for commutation of about 1,22,000 Indian pilgrims between their accommodation in Azizia and Haram Sharif. Total 15 shaded bus-stands were set up and water and tea were provided.

• Availability of new (2018 and above models) buses for the movement of Indian pilgrims between the two cities of Makkah and Madinah.

• SMS Alert system for dissemination of important information related to ‘Do’s’ and ‘Don’ts’ to Indian pilgrims during their stay in the Kingdom.

• A 43-minute long improved film/video titled ‘A Practical Guide to Perform Haj’ ’ was made for training and orientation of Indian pilgrims. The video is also screened in the buildings of the pilgrims.

• Distribution of Mobily SIM cards in India and the facilitation of its activation by sending Mobily teams at the buildings of pilgrims.

• Distribution of Metro Train Tickets to about 74,000 HCOI pilgrims in their buildings in Makkah.

• Remote city check-in or advanced collection of check-in baggage of HCOI pilgrims before their departure will be done for a hassle-free and comfortable return to India.

• A total of 507 scheduled flights from three airlines, namely Air India, Saudi Arabian Airlines and Spicejet, carried the HCOI pilgrims from 21 embarkation points across India to Jeddah and Madinah. The HGO pilgrims traveled by commercial flights, mostly to Jeddah.