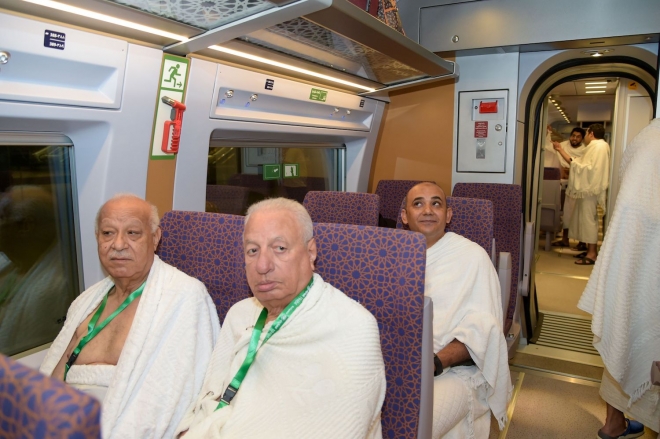 RIYADH: The CEO of the Saudi Railways Company (SAR), Dr. Bashar bin Khaled Al-Malik, announced that 2,333,748 pilgrims have been transported on 2,170 train journeys.

He said that this comes as part of the safe and convenient transport plan that meets the aspirations of the Saudi leadership, especially after the Cabinet assigned SAR in May 2019 the provision of the train services, its maintenance and operation.

Figures published by SAR showed that 340,035 pilgrims were transported by the Al-Mashaaer Al-Mugaddassah Metro to Mount Arafat, over 353,434 were transported to Muzdalifah, 377,199 from Muzdalifah to Mina, and 1,246,422 to the Jamarat facilities during the days of Tashreeq.

The Haramain high-speed train takes just 3 hours to travel between the holy cities of Makkah and Madinah. (SPA photo)

SAR has devoted over 1,700 employees, including engineers, technicians, drivers and supervisors, for the operation and maintenance of the Al-Mashaaer Al-Mugaddassah Metro, which serves the pilgrims.

Al-Malik highlighted that “the harmony between SAR’s employees has contributed to the implementation of the operation plan according to the adopted mechanism and with high efficiency.”

He thanked the Makkah Region Development Authority for its effective role in operating the Al-Mashaaer Al-Mugaddassah Metro and serving the pilgrims. He also thanked Makkah Gov. Prince Khalid Al-Faisal, adviser to King Salman, and Interior Minister Prince Abdul Aziz bin Saud bin Naif, chairman of the Hajj Supreme Committee, for their keenness to serve pilgrims through ensuring the operation and maintenance of the metro.

The chief of SAR confirmed the readiness of the metro and the completion of corrective and pre-emptive maintenance and trial operations, in addition to the application of 23 presumptions that contributed to the success of the trains’ operation plan this season.