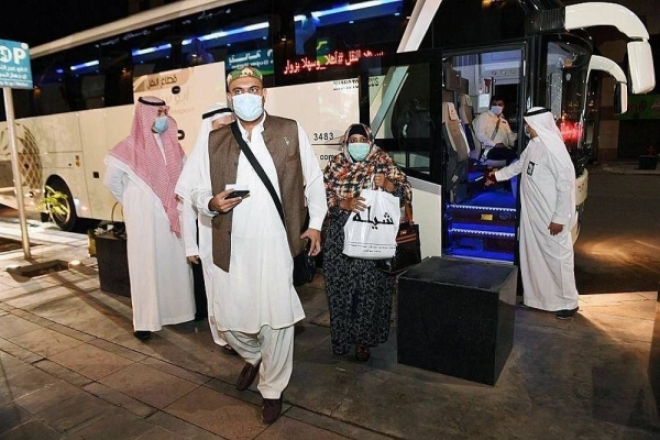 MADINAH — The first batch of Umrah pilgrims from abroad arrived in Madinah Monday, after performing Umrah rituals. They were 37 visitors from Pakistan.

The entry of the visitors to the Prophet’s Mosque will be organized according to the dates approved by the application of “Eatmarna,” and according to the possible operational capacity to apply precautionary and preventive measures.

According to the strategic plan drawn up by government agencies, the third phase of gradual return of Umrah, visit and the performance of prayers in the Grand Mosque and the Prophet's Mosque will witness the permission for 20,000 Umrah pilgrims, 60,000 worshipers and 19,500 visitors per day.

Meanwhile, the third batch of Umrah pilgrims coming from Indonesia arrived in Makkah on Monday to perform Umrah rituals in the Grand Mosque.

Upon their arrival, precautionary and preventive measures organized for pilgrims was implemented, by subjecting them to the three days quarantine, before performing the Umrah rituals.