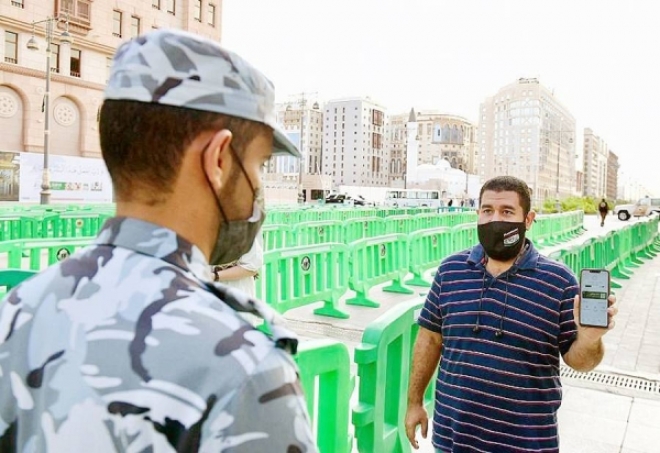 MADINAH — The General Presidency for the Affairs of the Grand Mosque and the Prophet’s Mosque has promoted the use of technology in many of its dealings during the Holy month of Ramadan in order to raise the level of health security and facilitate the arrival of Umrah performers and worshipers to the Two Holy Mosques on specified dates during which they perform the rituals of Umrah and prayers in an atmosphere full of faith and security.

The Saudi Press Agency (SPA) camera monitored how the security and health cadres, and employees of the agency of the Presidency for the Affairs of the Prophet's Mosque dealt with advanced technologies and electronic applications during Ramadan.

They inspect the health condition and issued permits of the worshipers on Tawakkalna from the moment they arrive at mosque yards since only immunized individuals who applied for and received a permit through the Tawakkalna application are allowed into the mosque in accordance with immunization categories.

Through Eatmarna, hundreds of worshipers and visitors can obtain permits to perform prayers within Al-Rawdah Al-Sharifah (the area between Prophet Muhammad's grave and his pulpit) and greet Prophet Muhammad (Peace Be Upon Him) and his companions, which is available through scheduled appointments and in line with a number of health and organizational measures.

The agency has provided devices to measure the visitors’ temperature and ensure the health condition of the worshipers. It also broadcasts awareness-raising messages on electronic screens inside the Prophet’s Mosque and in its squares about the precautionary measures. It also focused on technologies of the artificial intelligence device, the Smart Robot, which is used to disinfect and sterilize the Prophet's Mosque.

Moreover, the agency launched an electronic service during Ramadan in Arabic, English and Urdu languages that allows the visitors of the Prophet’s Mosque to know the status of occupancy of the prayer halls since the places are closed as soon as they reach the absorptive capacity in implementation of precautionary measures.

The number of beneficiaries of this service reached more than 75,000 in only the first 12 days of Ramadan. — SPA