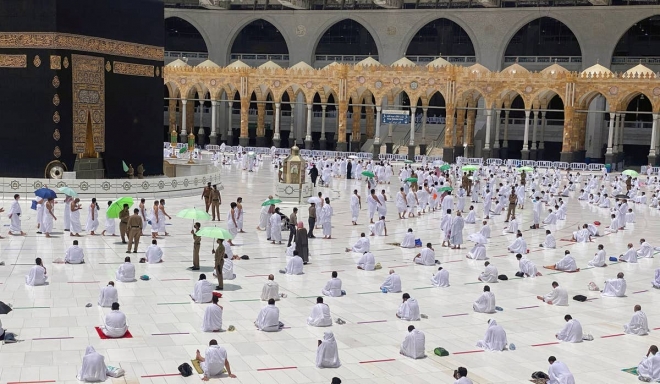 Tombs, holy places, churches and mosques are almost by definition disaster sites. If one has not happened yet, it’s a threat hanging over everyone who visits them. Religion and belief have been responsible for the lion’s share of human victims, whether they be killed during religious wars or pilgrimages. The saying “God is testing us” – or as Rabbi Yitzhak Batzri said in a radio interview on FM-103, “If you had heard the eulogies for the dead, you would have seen what our community understands: that these are sacrifices to God” – is not unique to Judaism.

Islam, Christianity and other religions place responsibility on a God who wants to test his believers. According to this idea, a massive disaster is only advance payment for sins, the cost of entry to the afterlife. One of the countries most hard hit by God's red right hand is Saudi Arabia. Hardly a year passes when pilgrims do not die of disease, overcrowding, accidents or dehydration.

One of the most tragic events during the hajj, the pilgrimage to Mecca, occurred in 2015. On September 11, 107 people were killed and some 400 were injured when a giant crane collapsed in Mecca. Two weeks later, at the nearby sacred site of Mina, one of the pilgrimage's stations, hundreds of people were killed in a stampede. The official report cited a death toll of 760 at the time; others estimate that the number is closer to 2,500 people.

Saudi Arabia pledged to pay the victims of the crane collapse, but the court acquitted the contracting company and ruled that the crane had fallen due to harsh weather conditions. The hand of God. More than three years passed before the country began compensating the victims. For the Mina disaster, which was much worse, no payments were made; the blame fell on the pilgrims for not heeding instructions.

But Saudi Arabia, whose image as the guardian of the holy places of Islam was severely compromised, did not hide behind investigative committees. The kingdom invested billions of dollars in improving infrastructure, expanding access roads, safety arrangements and supervising the pilgrimage. It installed thousands of cameras along the pilgrimage routes, as well as hundreds of sprinklers to help keep people cool off in the scorching heat. Thousands of supervisors, police, officials and guides are enlisted each year to direct pilgrims and check safety conditions on the roads. Temporary clinics go up in the huge tent camps that shelter some 2 million pilgrims that arrive every year. Strict quotas of pilgrims are given to each country, and those who do not have official stamps cannot enter the holy cities and are fined for breaking the law.

In recent years, Saudi Arabia has required every pilgrim to wear an electronic bracelet in order to know where every person is at any given moment. Pilgrims can also download an app that shows them the pilgrimage route, helps them find clinics and other aid and allows them to communicate with those facilities if needed. Only designated buses are allowed to transport pilgrims from one site to another. This year, the fast train from Mecca to Medina will resume service, after it was damaged in a 2019 fire – tickets went on sale in March. Saudi Arabia doesn’t wait until the last minute.

Because of the coronavirus, the kingdom decided not to let in pilgrims in 2020. This year, it drafted new rules and regulations limiting the number of pilgrims and requiring each one to present proof of vaccination or a coronavirus test taken one day before entering the country. Dozens of testing stations will welcome arrivals at the airport, police have already set up road blocks on the access roads to the sacred cities and designated supervisors will conduct random checks of visitors’ documents. Anyone who does not have the proper medical documents will be fined over $2,000.

Saudi Arabia took a major economic hit from the coronavirus last year, missing out on some $12 billion that would have gone into its coffers from the hajj. This year, it wants to encourage a return to normalcy, and is giving economic exemptions and benefits to tourism companies, hotels, entrepreneurs and businesses that provide services for the pilgrimage industry. But no sector is exempt from the strict coronavirus rules. Saudi Arabia, the most religious country in the Middle East, appreciates the power of Allah, but knows that it can and must soften the blow of His hand.

Israel, a high-tech superpower that boasts of the supreme importance it ascribes to securing its citizens, can learn a thing or two from the Kingdom of Saudi Arabia. No one is asking the Transportation Ministry to build a roller coaster to quickly ascend Mount Meron, or to outfit the pilgrims with a sophisticated electronic bracelet. But simple, basic management, like road blocks, pre-registering pilgrims and giving them tickets to the site so the authorities can monitor how many people are entering could have saved lives. Not to mention a small investment in infrastructure – it wouldn't even need to come close to that of the Saudis.

In ordinary years, Mount Meron hosts about half a million people, while some 2 million people – just four times that number – enter Mecca during the hajj season. If Israel would invest just five percent of Saudi Arabia's contribution to Mecca in the ruin on Mount Meron, where 45 people were killed, there would be no need to fly the flag at half-mast.


⇐ Previous:
Hajj to be held this year with ‘special conditions’
Next: ⇒
Quality building and astonishing design marks third expansion at the Grand Mosque