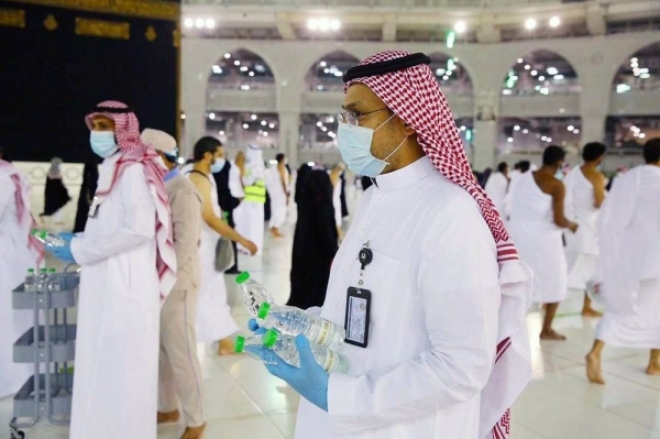 MAKKAH — The General Presidency for the Affairs of the Two Holy Mosques, on the night of Ramadan 27, distributed more than 200,000 Zamzam water bottles to Umrah performers and worshippers at the Grand Mosque. This distribution was effected under executive and service plans that were prepared by taking into consideration the highest health standards while offering the holy water inside the mosque.

Director of the Zamzam Administration Ahmad Bin Shanbar Al-Nadawi said that Zamzam water bottles were distributed along the Grand Mosque and its yards through more than 1,000 workers, 190 back bags and 375 cylinder bags with a capacity of 10 liters for each bag; a total of 37,500 liters of Zamzam water per day.

The administration has also allocated 10 mobile carts to distribute Zamzam water in Tawaf (circumambulation) area and other areas allocated for Tawaf, with a total capacity of 80 liters of cold and normal water, as well as mobile electronic pumps for constant sterilization as a precautionary measure under the preventive protocols that the administration adopts while distributing the holy water to visitors of the Grand Mosque.

Al-Nadawi said that the administration organizes distributing the cylinder bags inside praying areas in all floors allowed for praying, and is keen to provide enough amounts of water for areas allocated for funeral prayers, in addition to areas that host lessons at the Grand Mosque.

He noted that water distributing inside the Tawaf area for Umrah performers starts before Al-Maghrib prayer and lasts till to Al-Fajr prayer through cylinder bags, with taking into consideration the sterilization of bags, bottle holders, cylinder bags and carts for distributing water bottles in routes allocated for performing tawaf. — SPA