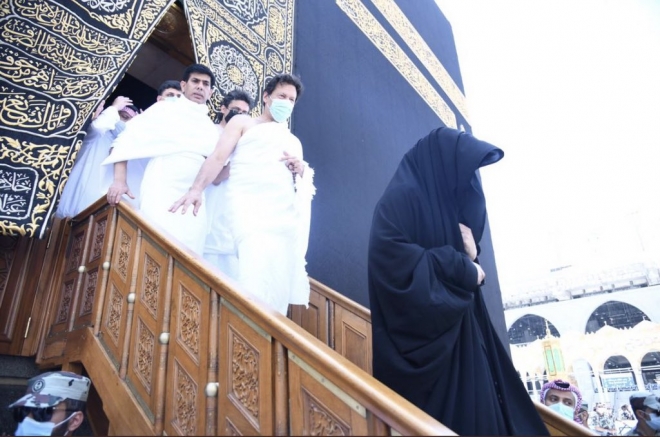 The doors of the sacred Kaaba were once again opened for the Prime Minister of Pakistan Imran Khan as he performed Umrah on Sunday as part of his three-day visit to Saudi Arabia.

Senator Faisal Javed Tweeted that the door of the holy Kaaba was once again opened for the Prime Minister of the Islamic Republic of Pakistan Imran Khan.

Prime Minister Imran Khan, who is on a three-day official visit to Saudi Arabia along with his wife Bushra Bibi and several cabinet members, has also paid sincere respects at the Prophet’s Mosque and had an iftar there.

Prime Minister Imran Khan had reached Medina to pay homage to the Holy Prophet (PBUH) barefoot which has garnered the attention of people.

The Prime Minister was received at the airport by the Governor of Medina, Amir Faisal bin Salman bin Abdul Aziz.

Meanwhile, pictures have also been shared online, in which it can be seen that while disembarking from the plane at Medina Airport, the Prime Minister was not wearing shoes and he was leaving with the delegation without shoes.

The premier along with the delegation had Iftar at the Prophet’s Mosque and offered Maghrib prayers.

It is pertinent to mention here that Prime Minister Imran Khan had arrived in Saudi Arabia on a three-day official visit at the invitation of Saudi Crown Prince Muhammad bin Salman.

The prime minister met the crown prince in Jeddah and discussed bilateral, regional and international issues. “The talks were marked by exceptional cordiality and a commitment to fortify the upward trajectory in the bilateral relationship,” said the Ministry of Foreign Affairs (MoFA) in a statement. The two sides also agreed upon further deepening cooperation in all fields.