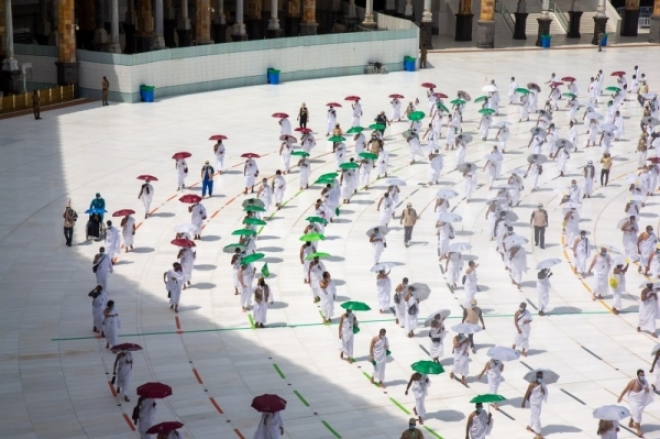 MAKKAH — The Agency for Projects and Engineering Studies at the General Presidency for the Affairs of the Two Holy Mosques unveiled its elaborate arrangements for the pilgrims at the Grand Mosque during the upcoming Hajj.

Eng. Sultan Al-Qurashi, undersecretary for projects and engineering studies at the presidency, said that a total area of about 108,039 square meters, including the entire mataf (circumambulating area around the Holy Kaaba), as well as the ground and first floors of the Grand Mosque and first mezzanine floor of the mataf structure will be available for the pilgrims.

There will be 20 main and subsidiary entrances and gates open to the terminal building, of which the most important are the King Abdulaziz Gate, Umrah Gate and Al-Fatah Gate, with the provision of 28 escalators to facilitate entry and exit at different levels.

Al-Qurashi revealed this while launching this year’s operational plan of the Agency for Projects and Engineering Studies at the presidency. The operational plan for the Hajj season includes making available of more than 161,186 square meters in the Third Saudi Expansion Structure in various floors, in addition to provision of various services.

The plan envisages the provision and preparation of external courtyards, spreading over an area of 131,924 square meters and the associated services of 2,586 toilets, and more than 1,131 ablution facilities for the Hajj season.

The Agency’s plan includes intensifying its engineering and technical efforts; activating technical services and enhancing the level of coordination with all concerned agencies at the Grand Mosque in order to create and provide spaces, as well as vertical and horizontal movement through the gates.

The plan also includes service facilities for the Third Saudi Expansion Projects of the Grand Mosque, after making all the preparations for the full use of current operational efficiency of basic systems and services such as the systems of air conditioning, lighting, sound, and ventilation, apart from the guidance system.

The plan also covers following up their operational performance through a technical engineering staff available around the clock, in line with the precautionary measures and preventive protocols being implemented against coronavirus at the Grand Mosque.