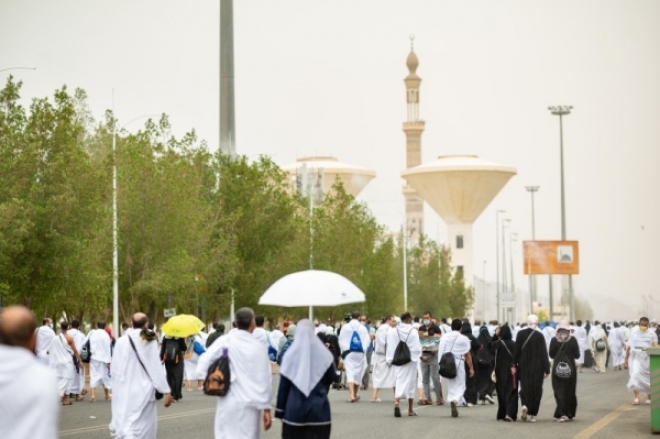 ARAFAT — At the high point of spirituality, around 60,000 pilgrims ascended on Monday on the vast plains of Arafat at the climax of the Hajj, which is being held in downsized form and under coronavirus restrictions for the second year running.

Chanting “Labbaik Allahumma Labbaik (O God, here I am answering Your call)...,” they flocked this morning to Namirah Mosque in Arafat, about 15 km east of Makkah, after spending a night in meditation and introspection at the Tent City of Mina.

Sheikh Bandar Bin Abdulaziz Balila, imam and preacher of the Grand Mosque, who is also a member of the Council of Senior Scholars, delivered the Arafat sermon at the grand Namirah Mosque, reenacting

the famous farewell sermon of Prophet Muhammad (peace be upon him) when he performed his only Haj.

In the sermon, Sheikh Bandar called on Muslims to fear God and obey His commands to achieve success in this world and the hereafter. He also emphasized that the best form of worshipping God also includes serving fellow beings and humanity in the best possible manner. The sermon was translated into ten languages, including English, Malay, Urdu, Persian, French, Chinese, Turkish, Russian, Hausa, and Bengali.

After the sermon, Sheikh Bandar led the prayers. Following the noble tradition of the Prophet (PBUH), he performed noon (Dhuhr) and evening (Asr) prayers, shortened and joined together, with one adhan and two iqamas.

Pilgrims joined the prayers at and around Namira mosque and then started performing the Standing (wuqoof) at Arafat. Wuqoof Arafat, one of the four pillars of Hajj, begins afternoon prayers. Pilgrims will engage in prayers and supplications until after sunset. They will seek forgiveness and the pleasures of Allah.

Muslims in most parts of the world are observing fasting on Monday in a show of solidarity with the pilgrims. It is a great Sunnah for those who do not perform Hajj to observe fasting on Arafat Day.

Earlier in the day, the mask-clad faithful, all citizens and residents of Saudi Arabia, converged on Mount Arafat in an orderly and smooth manner after spending the previous day and night in their camps in the tent city of Mina.

Pilgrims in seamless white clothes — resembling a white sea of humanity — had started heading for Arafat early this morning in peace and tranquility while maintaining social distance to ensure their safety as well as the safety of those who are engaged in serving them.

The pilgrims took their places in the 110,000-square-meter Namirah Mosque and 8000-square-meter courtyards well before the start of the Arafat Day sermon. The pilgrims’ movement was under direct follow-up of the personnel of the various security sectors to organize the movement, in addition to guiding pilgrims and ensuring their safety. Different government sectors taking part in the service of pilgrims are providing all medical, emergency and catering services in Arafat for the pilgrims.

After completing the ritual of standing at Arafat by sunset, the pilgrims then move to Muzdalifah in a calm and dignified manner, reciting Talbiyah a great deal. They will offer the Maghrib prayer with three raka’a and Isha prayers in two Raka’a at the time of Isha after reaching Muzdalifah, and spend the night there in supplication.

A total of 60,000 Saudis and expatriates have been selected from among 558,000 applicants to perform the pilgrimage this year, as compared to about 2.5 million pilgrims who performed the pilgrimage in 2019 before the outbreak of the pandemic. This year’s Hajj is limited to pilgrims, between the ages of 18 and 65 years, and who do not have chronic diseases. Last year, Saudi Arabia organized the smallest pilgrimage in terms of the number of participants in modern history.

The Ministry of Hajj and Umrah has introduced for the first time Hajj smart cards and smart bracelets that would enable the pilgrims to reach their tents at the holy sites of Mina, Arafat and Muzdalifah and hotels in Makkah with the minimum possible human contact and facilitate their transportation in the holy sites. The card will also help in tracing any pilgrim in the event of losing contact with him.