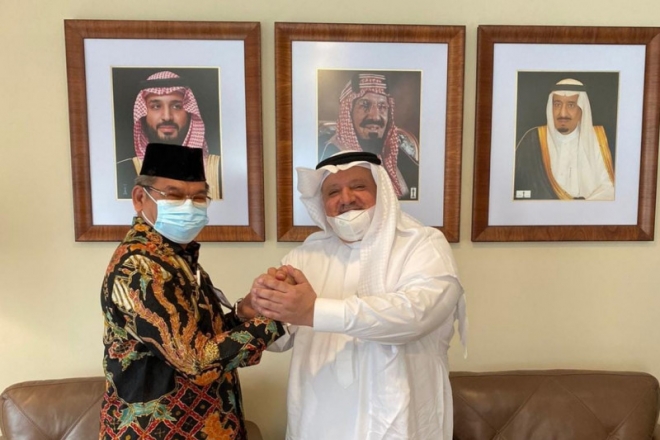 Jakarta (ANTARA) - The acting director general of Hajj and Umrah at the Indonesian Religion Affairs Ministry has lobbied the Saudi Arabian Ambassador to Indonesia to allow prospective Indonesian pilgrims to undertake Umrah soon.

"We hope that the Saudi Arabian government will immediately end the suspension of the implementation of Umrah for prospective Indonesian pilgrims, thus they can have the opportunity to go to the Holy Land," acting director general of Hajj and Umrah, Khoirizi, said in a written statement received here on Thursday.

There has been no recent regulation from Saudi Arabia on the implementation of Umrah for foreign countries, he said. Suspended countries have to undergo strict health protocols if they want to continue to dispatch prospective pilgrims, he added.

During a meeting with Saudi Arabian Ambassador to Indonesia, Esham Altsaqafi, Khorizi informed him that the handling of COVID-19 in Indonesia has continued to improve.

In addition, he said that prospective Indonesian pilgrims are prepared to follow the health protocols promulgated by the Saudi Arabian government to undertake Umrah.

"There are five countries which send the most Umrah pilgrims but have not been able to send them – comprising Pakistan, Indonesia, India, Turkey, and Egypt. We hope that Indonesian Umrah pilgrims will be prioritized to be dispatched soon," he remarked.

However, Umrah has been suspended in order to control the pandemic, he said.

Furthermore, the ambassador said he had apprised the Saudi Arabian government of the decline in COVID-19 cases in Indonesia, which would be considered when the government decides on issuing Umrah permits.

Although Umrah has been allowed since Muharram 1443 Hijri for certain countries, only 1,000-1,500 pilgrims have participated in it, he informed.

"The low participation is due to the strict procedures in the Umrah implementation to curb pandemic transmission," he added.