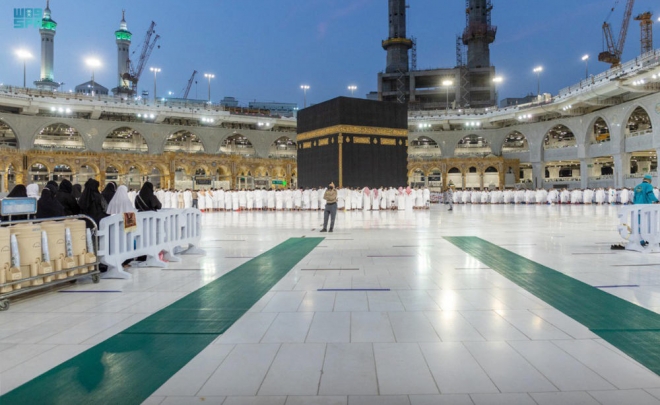 MAKKAH: Several teams of experts have been deployed to provide services for pilgrims at the Grand Mosque including maintaining the Kaaba’s Black Stone, cleaning prayer areas, ensuring guidance information and proper translations, and establishing security and crowd control.

This is according to Dr. Saad bin Mohammed Al-Muhaimid, the under-secretary-general for the affairs of the Grand Mosque, who told Arab News that the presidency was working jointly with several government bodies to prepare for the influx of Umrah pilgrims.
On the upkeep of the Black Stone, he told Arab News: “The maintenance work is carried out by a professional specialist technical team, using modern advanced methods.” He said they have been able to complete all their work within “record time” while taking into account precautionary measures.

Al-Muhaimid said that the preparations have included ensuring that officials can manage pilgrims entering and leaving the Grand Mosque, and ease their circumambulation around the Kaaba.

Among the services provided include moveable shelves designated for Qur’ans translated into Braille and several languages. A total of 95,473 Qur’ans have been available in various areas inside the Grand Mosque. Al-Muhaimid explained that given the importance of performing the Umrah rituals, such as the circumambulation, as stipulated by the Prophet  Muhammad (peace be upon him), more than 40 mutawwifs are at the service of pilgrims. These guides are ready to accompany pilgrims throughout their pilgrimage and provide expert advice.

The Grand Mosque’s guides also provide answers to questions in several languages. There are also seven sites inside the mosque and four offices where pilgrims can use telephones throughout the day to ask questions of 32 sheikhs, several judges and university scholars.

In the wake of the government lifting its precautionary measures, 500 security personnel will remain on duty inside and outside the mosque to ensure the safety of pilgrims and visitors.

Al-Muhaimid said that the Grand Mosque’s mukabariyah has been equipped, sanitized, scented and furnished with 15,000 carpets. There are also ongoing operations to clean, disinfect and sanitize the entire mosque 10 times a day, with the help of over 4,000 male and female workers, 80,000 liters of disinfectant, and 1,700 liters per day of the finest scents through 100 scent diffusers. This maintenance is also provided for the King Fahd Expansion and its pathways.

As part of its goal to spread Islamic messages from the Two Holy Mosques to visitors and Muslims around the world, Al-Muhaimid said the authority operates radio broadcasts 24 hours a day in 10 approved international languages through its Manarat Al-Haramain platform.


⇐ Previous:
Makkah hotels on track to recover in 2022
Next: ⇒
Prince Khaled chairs meeting to transform Makkah Region into a smart region