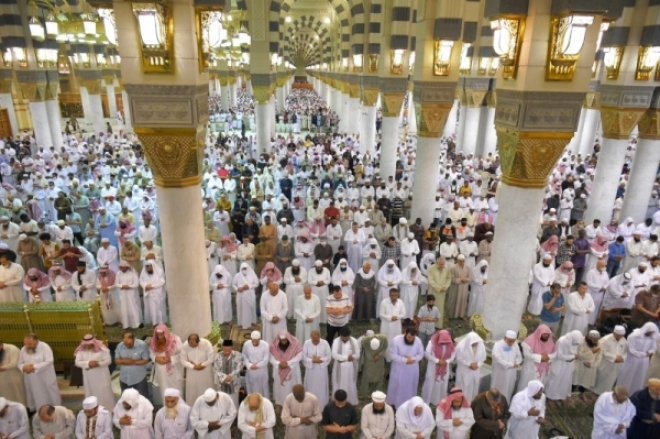 MAKKAH — In an unparalleled spiritual ambience that the fasting month has offered, hundreds of thousands of worshipers thronged the Grand Mosque in Makkah and the Prophet’s Mosque in Madinah to perform the obligatory isha prayer and the voluntary taraweeh special prayers on the first night of the holy month of Ramadan on Friday.

The faithful performed the prayers, standing shoulder to shoulder, without maintaining social distancing for the first time after a hiatus of two years since the outbreak of the coronavirus pandemic. The Umrah pilgrims and visitors from within the Kingdom and abroad welcomed the returning to the normal spiritual atmosphere that enabled them to perform the Umrah rituals and engage in supplications, seeking forgiveness and mercy from the Almighty God.

The enthusiastic faithful, including Saudi citizens, expatriates and foreign pilgrims, also attended mass iftar (breaking of fast) projects that were resumed for the first time after lifting of two-year-long coronavirus restrictions.

The General Presidency for the Affairs of the Two Holy Mosques and other related agencies have started offering an integration of services for all the worshipers. The presidency has already recruited approximately 12,000 male and female staffers who are divided into four shifts.

The presidency made available a package of services, as well as field, preventive and operational measures aimed at providing a healthy and safe environment that helps the worshipers perform their rituals in a safe spiritual atmosphere.

The entire Grand Mosque is witnessing the ongoing washing, disinfecting and sterilizing operations at least 10 times on a daily basis. The presidency has mobilized more than 4000 male and female workers for that purpose. A total of 130,000 liters of disinfectants and 2500 liters of the finest types of fresheners and nearly 35,000 liters of sterilizers are being used on all surfaces and carpets in a day.

About 11 smart robots were used to sterilize 25,000 carpets at the Grand Mosque. The Agency at the presidency continues its services of distributing Zamzam water through making available more than 25,000 containers distributed throughout the Grand Mosque. There are 2500 fixed marble stations for drinking the holy water in the third northern expansion of the mosque.

The presidency is also supervising the operations of electric carts inside the Grand Mosque. It has harnessed artificial intelligence and interactive screens in the service of the worshipers, including robots for sterilization and distribution of Zamzam water. There is a robot to answer the questions of the faithful and another one for purification.

There are eight interactive screens, 34 spatial guidance screens, four screens for guidance in various languages, and nine screens to monitor its service, 376 wireless devices to make it easier for field staff to communicate and integrate among themselves, in addition to nine wireless stations for the presidency’s command to follow up on the field work and deliver directions to its staff.

The presidency also allocated six channels to communicate with the operations center or through the unified number 1966, in addition to distributing Zamzam water to the worshipers and Umrah performers through special transport carts, and thermos flasks throughout the Grand Mosque as well as at fixed marble stations for drinking the holy water.

At the Prophet’s Mosque, the Agency under the presidency has mobilized all its capabilities and resources to enable the faithful to perform their rituals in ease and comfort.


⇐ Previous:
Grand Mosque equipped with 25,000 new luxurious carpets
Next: ⇒
SR10,000 fine for anyone caught coming to perform Umrah without a permit