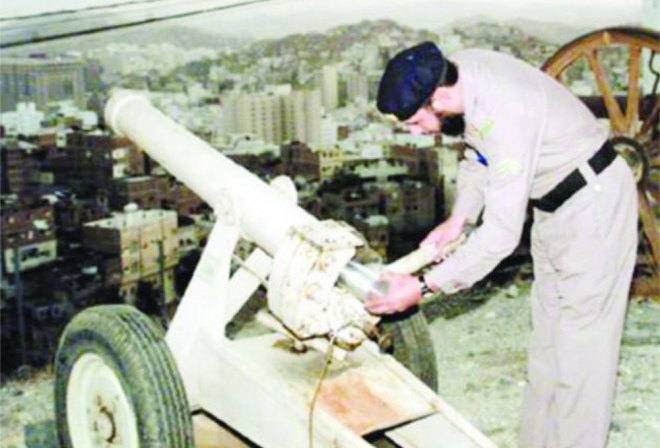 MAKKAH: Ahead of Ramadan, Makkah residents are reminiscing over the firing of the city’s iconic iftar cannon, a tradition that ended eight years ago.

For years, an important daily event took place during the holy month, when residents would break their fasts with dates and Zamzam water after hearing the distinctive sound of a cannon being fired at the beginning of the Maghrib prayer.
Ahmed Saleh Halabi, a researcher on the history of Makkah, said that historical sources show that the idea was unplanned, and first took place in Cairo, Egypt. There are several narratives surrounding the origins of the tradition, he added.

Some historians claim that at sunset on the first day of Ramadan in 865, Mamluk Sultan Khosh Qadam wanted to test a new cannon he had received. The first time it was fired coincided with the Maghrib prayer, leading locals to believe that the sound signaled the breaking of the fast. They welcomed the new practice, and the cannon was then fired each day, as well to mark the start of sahoor and imsak.

Halabi said: “One narrative says that the appearance of the cannon was by chance and it wasn’t at all intended to be used for that purpose. Some of the soldiers were cleaning one of the cannons, and a shell set off in the sky of Cairo. It happened to be at Maghrib time one Ramadan day.”

Other sources claim that the tradition began through Qadam’s daughter, who heard the accidental cannon shot. Halabi said: “People thought that the government has introduced a new tradition to announce the end of fasting and they began talking about it. Fatima, Qadam’s daughter, found out what happened and liked the idea. She then issued a decree ordering the use of cannon at Maghrib, imsak and during official holidays.

“People thought that it is a new way of announcing the end of fasting. The cannon was therefore named after the princess,” Halabi said.

Both narratives show that the Ramadan cannon appeared for the first time in Cairo, becoming a traditional sound signaling the end of fasting.

As for the Ramadan cannon in Makkah, Halabi said that it was part of a Ramadan tradition across the Islamic world. In Makkah, a famous mountain called Cannon mountain is situated north of the Grand Mosque. It extends to the Quaiqian mountain, known as one of the Al-Akhshabayn mountains in Makkah.

The city’s existing cannon was located on a small area — about 10 square meters — overlooking Jarwal neighborhood. It had been in the foothills of Makkah for 100 years and its sound was heard across the city at prayer time.

Halabi said that Makkah’s Ramadan cannon fired blank ammunition weighing almost two kilograms. From the beginning of the holy month of Ramadan until the announcement of the beginning of Eid Al-Fitr, it used to fire about 150 rounds.

He added that 2022 is the eighth consecutive year that the sound of the Ramadan cannon in Makkah will be absent. He hopes that the ritual associated with the holy month will be reintroduced.