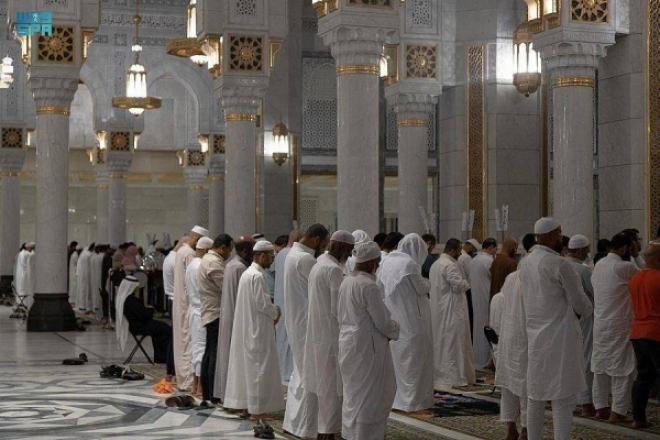 MAKKAH — The General Presidency for the Affairs of the Two Holy Mosques has prepared 80 praying areas to receive worshippers during Ramadan.

Director General of the Northern Expansion Eng. Walid Al-Masudi noted that the doors allocated by the general presidency facilitate the access of worshippers to praying areas at the ground and first floor, and the first and second mezzanine floors, which together represent 95 percent of the total capacity of the building that can accommodate 300,000 worshippers. If all internal praying areas are full, the northern yards with a capacity of 280,000 worshippers can be used, in addition to the western yards adjacent to the building.

Meanwhile, e-services play a major role in facilitating the access of worshippers to the two Holy Mosques as part of the operational plan for Ramadan.

The service of “Status of occupancy of praying areas at the Prophet's Holy Mosque” — available in Arabic, English and Urdu — is considered among the newly introduced technological services. It allows visitors of the mosque to know the status of the occupancy rate in all parts of the mosque before coming to the mosque around the clock. Praying areas allocated in 12 sites inside the Prophet's Mosque and in Al-Haswat, in addition to the yards and expansions as well as the roof.

The service, available through eservices.wmn.gov.sa/e-services/prayers_map, shows beneficiaries the status of occupancy at praying areas with four colors — “available”, “almost full”, “full”, or “unavailable” — contributes to the flexibility of movement at praying areas across the mosque and its yards, in addition to activating the field operational plans to organize crowds at peak hours. — SPA