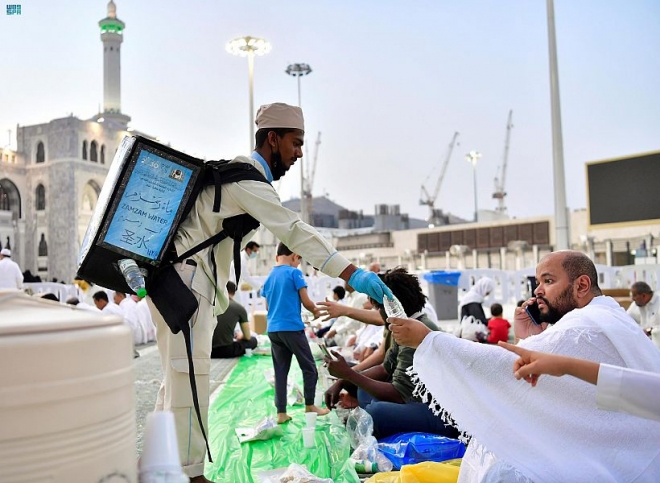 JEDDAH: More than half a million liters of Zamzam water has been distributed to visitors during Ramadan by The General Presidency for the Affairs of the Grand Mosque and the Prophet’s Mosque.

It is part of efforts to provide Zamzam water to worshippers throughout Ramadan, which marked its first day on Saturday.

Inside the yards of the two Holy Mosques, Zamzam water dispensing stations and fountains are maintained for visitors year-round. The water is provided in coolers that are cleaned and filled daily.

The water is sourced from the Zamzam well located 21 meters east of the Kabaa in Makkah.

Millions of visitors drink Zamzam water each year while performing Hajj and Umrah. At the end of their visits, many buy bottled Zamzam water to gift to family and friends back home.

To help save time for Hajj and Umrah performers, one of the goals of the King Abdullah for Zamzam Water Project (KPZW) was to allow filled Zamzam water bottles to be purchased in airports in Jeddah, Madinah and in Kudai in Makkah.

With the ever-increasing number of visitors arriving for Umrah and Hajj, the demand for Zamzam water also surged, which has led to further development of the well.

Project have worked toward maintaining the site and improving Zamzam water distribution across the two Holy Mosques.