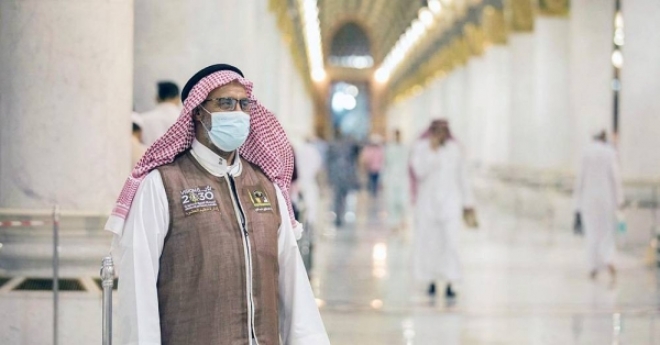 MADINAH — The General Directorate of Crowds at the Prophet’s Mosque continues to provide the highest levels of service to visitors and worshipers during Ramadan, by managing crowds in the corridors and squares, facilitating the tasks of crowds during peak times, following the crowds' management mechanism, and facilitating access to the various sections of the Prophet’s Mosque.

The Directorate is keen to overcome all obstacles to facilitate the prayers' movement and to ensure the smooth flow of crowds throughout the Prophet’s Mosque without any obstacles, in order to enable them to perform their rituals in an atmosphere of spirituality and tranquility.

Hatem Bin Saleh Al-Owfi, director of the General Directorate of Crowds, said that the department is working to organize the movement of worshipers’ entrance and departure from the mosque, in coordination with the concerned authorities, through opening 38 main corridors, 14 secondary corridors, and 38 entrances as well as the parking lots, 18 ordinary stairs, and 12 escalators to ensure smooth movement.

Al-Owfi pointed out that the Directorate guides the prayers into the Prophet’s Mosque until it reaches its full capacity, and then directs the flow towards the roof and then to the internal squares, adding that after ensuring the full capacity is reached, the worshippers are directed to the new western squares. — SPA


⇐ Previous:
2022 Hajj and why you should expect higher fares
Next: ⇒
More than 500k liters of Zamzam water distributed during Ramadan