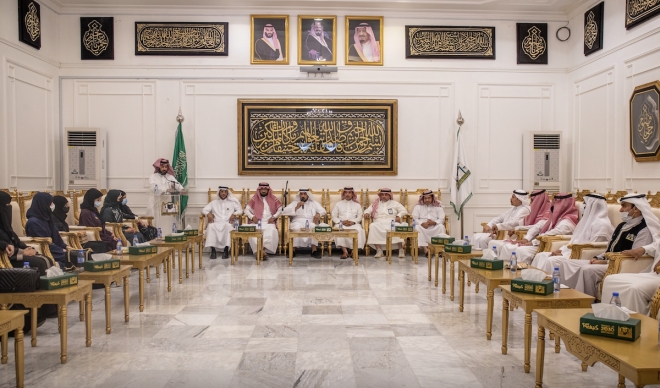 JEDDAH: Sheikh Abdulrahman Al-Sudais, president of the General Presidency for the Affairs of the Two Holy Mosques, has announced an initiative for gifted students in coordination with the King Abdulaziz and His Companions Foundation for Giftedness and Creativity (Mawhiba).

The coordination between the general presidency and Mawhiba aims to contract a partnership or memorandum of understanding to develop and encourage local talent to become an integral part of the world stage.

Al-Sudais stressed in his speech that the presidency was keen on supporting talented and distinguished students as its goal was to maximize its partnerships with the education system.

Following the triumphs of the Saudi delegation at the International Science and Engineering Fair 2022 earlier this month, members of the decorated team and their families were hosted by the presidency to perform Umrah on May 21.

Following the triumphs of the Saudi delegation at ISEF 2022, members of the team and their families were hosted by the presidency to perform Umrah. (Supplied)

ISEF 2022 saw the participation of pre-college students from around the world showcase innovation in scientific research and advancement. Dozens of Saudi students scooped awards at the exhibition.

Al-Sudais applauded their accomplishments and he spoke more about the presidency's links with the education sector.

“What the talented team achieved by all standards is considered an unprecedented global achievement at ISEF 2022, by achieving 22 international awards, including best project award, 15 major awards, and six special awards, outperforming students from 85 countries.

“The presidency has dispatched a large number of people abroad for academic studies with the aim of developing their educational and academic capabilities, as well as urging researchers and graduate students to harness technology and digitization in the service of pilgrims and visitors through specialized research, elaborate studies, and support for creators and inventors.”

He said that talented students would be able to register their inventions and develop their proposals, and he encouraged younger generations to be a part of the Kingdom’s digital transformation in various fields through school curricula and quarterly activity sessions.

He added that partnerships were important, especially considering that the two colleges of the Grand Mosque in Makkah and the Prophet’s Mosque in Madinah had more than 1,000 students from more than 50 countries.

Al-Sudais announced an annual competition under the auspices of the presidency for talented students through their participation in any development work presented to the Two Holy Mosques.

He also announced a cooperation initiative between the presidency and the education sector to enable students to volunteer in any field the presidency needed to serve the Two Holy Mosques.