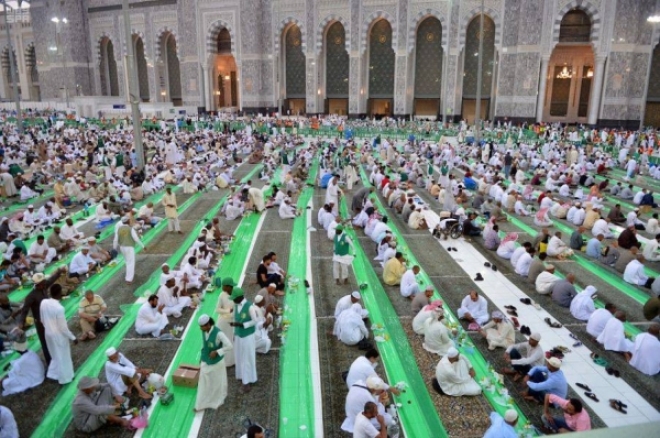 MAKKAH — The General Presidency for the Affairs of the Two Holy Mosques announced that services and permits for holding iftar meal for fasting people at the Grand Mosque in Makkah would be resumed from Thursday, June 2.

Muhammad Al-Jabri, deputy head of the Presidency for executive and development affairs, said that permits will be issued for spreading iftar meal sufras on Monday and Thursday in every week as well as on Ayyamul Beed or Bright Days (13th, 14th and 15th day of every lunar Hijri month).

Permits will be issued to spread iftar meal sufras on the first floor of the King Fahd Expansion Area of the Grand Mosque. Permits will be granted to spread two sufras for individuals and four sufras for charity organizations. They will also be allowed for manual distribution of iftar meal at mas’a (the area of sa’i ritual between Safa and Marwah).

Al-Jabri said that the supervisory tasks to organize and monitor iftar meal operations for fasting people inside the Grand Mosque have already started.

“This will be in total compliance with all approved health standards for the distribution of iftar meal as well as for ensuring the quality of dates and their packaging. It will be ensured that all the contents on sufras are within the list of permitted foods,” he said.

It is noteworthy that Ayyamul Beed fasting is highly recommended by the Prophet (peace be upon him) and he used to observe it.

The 13th, 14th and 15th day of every month in the Islamic calendar are called Ayyamul Beed (white or bright days) because the nights in these three days are bright and white due to the fullnesss of the moon. During these days, the moon becomes very white and can be seen by the naked eye.