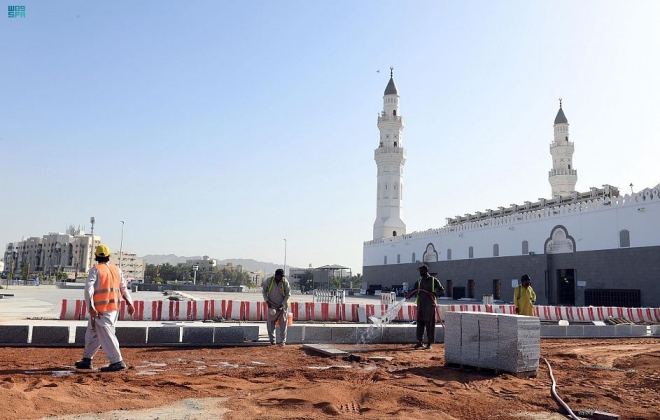 JEDDAH: Major redevelopment work has got underway at Madinah’s historic Quba Mosque to further expand the holy site first built upon by the Prophet Muhammad more than 1,440 years ago.

In April, during Ramadan, Crown Prince Mohammed bin Salman announced that the mosque would be increased tenfold in size as part of a project named after King Salman.

Four years ago, the crown prince ordered the restoration of 130 historical mosques in the Kingdom under the Saudi government’s national regeneration program.

In a visit to Madinah during the recent holy month of fasting, he said the enlargement project was aimed toward achieving the objectives of Vision 2030 within the Guests of God Service, and Quality of Life programs.

On completion of the largest development in its history, Quba Mosque will be able to receive more than 66,000 worshippers in an area covering 50,000 square meters.

The project was designed to link the current mosque with shaded courtyards on four sides, all capable of providing the necessary services but not structurally attached to the main building.

The road network and surrounding infrastructure will also be revamped to provide easier access to the mosque and improve visitor safety and security, while the project will resolve overcrowding issues as well as preserving the architectural style of the mosque and other nearby monuments.

Its current praying area covers 5,000 square meters, with the building and facilities taking up 13,500 square meters and accommodating a maximum 20,000 worshippers.

Quba Mosque is located 5 kilometers south of the Prophet’s Mosque in Madinah and was constructed in 622. It is believed that the Prophet Muhammad frequently prayed at Quba Mosque, especially on Saturdays, and urged his companions to do so too.

There is a hadith about the mosque, with the Prophet Muhammad reported to have said: “Whoever makes ablutions in this house and offers one prayer therein, will be rewarded the equivalent of one Umrah.” It is why the mosque remains of considerable religious and historical importance to Muslims.

It underwent renovation during the eras of caliphs Uthman bin Affan and Omar ibn Al-Khattab. The latter was the first to add a minaret to the structure.

During the Saudi era, Quba Mosque, along with other houses of worship, were regularly revitalized. In 1968, its northern side was expanded, and then in 1985, King Fahd ordered several enlargements while maintaining the building’s historically significant architectural features.


⇐ Previous:
10-year deportation for anyone caught fingerprinting for Hajj without a permit
Next: ⇒
Issuing iftar permit to resume for Ayyamul Beed, Monday and Thursday fasting at Grand Mosque from Thursday